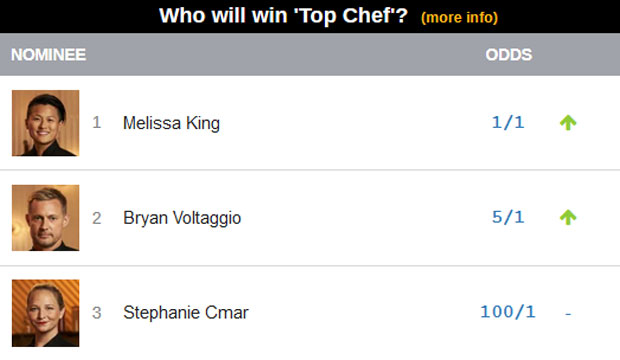 “Top Chef: All-Stars L.A.” ends tonight, June 18, after 14 weeks of grueling culinary competition with three chefs vying for the title and the $250,000 grand prize that goes along with it. So who has the advantage: Stephanie Cmar, Melissa King or Bryan Voltaggio? Fans of the show have been placing their bets here in our predictions center every week, and those predictions are combined to calculate our official racetrack odds. You can make your predictions too.

As of this writing King is the chef to beat with even odds. She has been the front-runner for much of the season, according to our users, and it’s easy to see why. She won three quickfire challenges and six elimination challenges including the last three challenges in a row. That makes her by far the winningest chef in the competition. However, it only takes one bad day to cost you the victory. Her former competitors Kevin Gillespie and Gregory Gourdet also had tons of challenge wins, but they had to pack their knives and go anyway — Gillespie was even eliminated twice.

Voltaggio follows close behind with 5/1 odds. His track record this season hasn’t been nearly as strong as King’s: he won zero quickfires and only one elimination challenge (“Cabin Fever“), and he was very nearly eliminated in the penultimate episode, “Parma.” But his reputation precedes him. He was a runner-up when he originally competed on the show in season six, and he was also a runner-up on the spinoff “Top Chef Masters.” With that much experience, he could very well pull off a clutch finale performance that will get him the crown.

Cmar is an underdog with distant 100/1 odds, but we’ve been underestimating her all season. In fact, we predicted she would be eliminated multiple times, but she has proven to be a survivor. What’s more, she’s peaking at exactly the right time. She was frequently at the bottom in the first half of the season, but since her team won “Restaurant Wars” she has gotten a second wind. Since then she won the “Colossal Coliseum Kaiseki” challenge and was the runner-up in the “Michael’s Santa Monica” and “Parma” challenges. So she’s heading into the finale with a lot of momentum, which could make her the comeback story of the year.

Who are you betting on to win tonight?