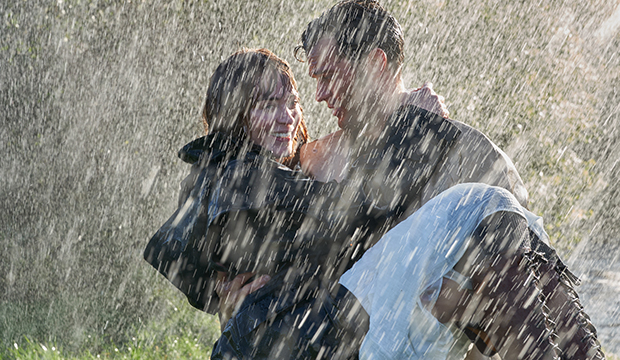 Look out for Irish romantic comedy “Wild Mountain Thyme” to score Golden Globe bids in the comedy/musical film categories when the Hollywood Foreign Press Association announces its nominations on Feb. 3.

With no clear comedy front-runner, there’s a bunch of potential contenders jockeying for attention alongside “Thyme,” including “On The Rocks,” “Palm Springs,” “Borat Subsequent Moviefilm,” “Emma”, “The King of Staten Island,” and the upcoming “The Prom” and “Promising Young Woman.”

“Wild Mountain Thyme” is the latest from writer-director John Patrick Shanley (“Doubt”). Set in the lush Irish countryside, it stars Emily Blunt as Rosemary, a farmer who pines for her dashing neighbor Anthony (Jamie Dornan). The two become caught up in their families’ land dispute, as Anthony’s father (Christopher Walken) wants to sell their farm to American relative Adam (Jon Hamm).

The awards prospects for “Wild Mountain Thyme” are not entirely clear yet, particularly after the film’s trailer debuted to noise from Irish media about the spotty accents sported by some of the cast. While Ulster native Dornan seems to have avoided this early criticism, Blunt and Walken adopt Irish accents that have irked some on the Emerald Isle. After the film opens in theaters and on demand on Dec. 11, audiences will be able to judge for themselves.

Notwithstanding that small speed bump for the film, “Wild Mountain Thyme” is hovering in 11th place in our combined odds in Best Comedy/Musical Film, while Blunt is sitting pretty in seventh place, Dornan is currently in 12th, and Shanley is more of a longshot in the catch-all directing and writing races. However, don’t underestimate the HFPA’s affection in particular for leading lady Blunt and writer/director Shanley.

Blunt has scored six career Globe nominations to date, for “The Devil Wears Prada” (2006), “The Young Victoria” (2009), “Salmon Fishing in the Yemen” (2012), “Into the Woods” (2014) and “Mary Poppins Returns” (2018), winning one for TV movie “Gideon’s Daughter” in 2007. Her nomination for “Yemen” in particular might be a telling clue, as that film was also an under-the-radar, low-key love story set in an exotic location. It was also a relatively wide open year for comedies, and the film scored a Best Comedy/Musical Film nomination and bookend bids for stars Blunt and Ewan McGregor. All three lost that year, with Blunt falling to eventual Oscar winner Jennifer Lawrence (“Silver Linings Playbook”).

Another factor to keep in mind this year is that Blunt shows off her impressive singing chops in the film, which often impresses the HFPA. Blunt’s nominated “Poppins” role featured a lot of her singing, and most recently, Emma Stone triumphed at the Globes for “La La Land” (2016) on her way to ultimately winning an Oscar.

Shanley has an impressive Globes pedigree as well. He has reaped two Golden Globe bids to date, for writing the screenplay to “Moonstruck” (1987) and adapting his 2005 Tony and Pulitzer Prize-winning play “Doubt” (2008). He also directed his four “Doubt” stars — Meryl Streep, Philip Seymour Hoffman, Amy Adams and Viola Davis — to acting nominations at the Globes, and “Moonstruck” was nominated in the Best Comedy/Musical Film category, getting wins for Cher and Olympia Dukakis and a bid for Nicolas Cage.

Dornan has yet to score a nod at the Globes, missing out for his most acclaimed role to date in the TV series “The Fall.” But in a wide-open field, he could sneak in if the film is well received and the HFPA want to make it up to the star. 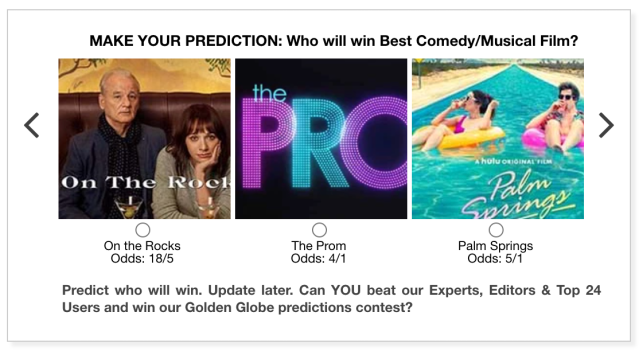