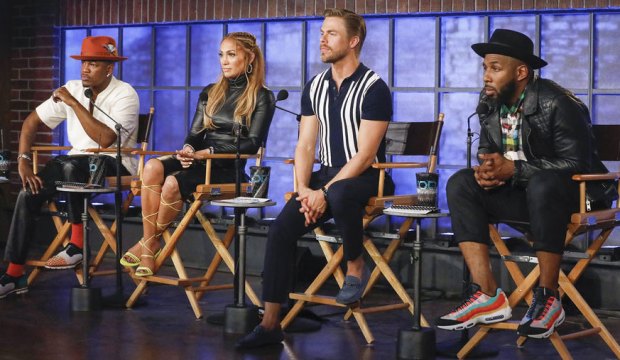 After “World of Dance” aired “The Duels 1” on June 30, the show took a week off, perhaps due to the Independence Day holiday or perhaps to give us time to absorb the slightly controversial result of that last battle between Kurtis Sprung and Styles and Emma. But the show returned on July 14 to continue the single-elimination round in which acts are pitted against each other in dance combat. The Upper Division continued their face-offs tonight, so who won, who lost, and who was worthy of a chance at redemption? Scroll down for our live blog with all the minute-by-minute developments as they happen.

As in the Qualifiers round, there are no scores this season for the Duels, just a yes or no from judges Jennifer Lopez, Derek Hough and Ne-Yo. If you get two out of the three on your side, then you move on to the next round. But they’re not the only ones sitting in judgment. Guest judge Stephen “Twitch” Boss, a former “So You Think You Can Dance” finalist, is evaluating the performances too, and while he doesn’t get to decide the results of the Duels, he does decide which two losing acts get to perform again in the redemption round for one last chance to advance. So if you don’t get Lopez, Hough or Ne-Yo’s vote, you’d better hope you get Twitch’s.

In the first week of the Duels, Sprung, UPeepz and Jefferson y Adrianita won their head-to-head match-ups to advance to the Semi-Finals, while Styles and Emma, The Rise and Luca and Alessandra lost and have to wait for Twitch’s final judgments. So what did you think of this week’s performances and the judges’ verdicts? Follow along below starting at 10:00pm (times listed are Eastern).

SEE‘World of Dance’ winner predictions: Oxygen are early favorites … but so is a couple that was just eliminated

10:00 p.m. — It’s the second day of the Duels, the last chance to get to the main “World of Dance” stage. Contestants don’t know who they are dueling until they walk through the doors to compete. Only one act can move forward from each Duel — and it’s time to get started! Don’t forget, at the conclusion of tonight’s competition Twitch will choose which acts get a second chance in the Redemption round.

10:10 p.m. — The first Duel is Jake & Chau vs. Josh & Erica, a couple of Upper Division pairs who have both displayed incredible chemistry in the previous round. At this stage, J-Lo is interested in seeing whose chemistry causes the biggest reaction with the audience. Jake & Chau are dancing first and they’re known for their explosive athleticism. They immediately draw cheers from the crowd after some acrobatic tricks, but Derek notices they’re not synchronized throughout the whole routine. Regardless of a few missteps, this pair killed it! Derek called it “incredible, interesting and innovative.” Twitch wished they had more “side-by-side” choreography and J-Lo agreed. Ne-Yo says there is a small margin for error and there were some minor mistakes.

10:20 p.m. — Josh & Erica take the stage next and J-Lo is immediately concerned when she sees them wrapping each other up in their suspenders. “It already hurts,” says the judge. No risk, no reward! They go through a series of fast-paced movements with the suspenders wrapped around Erica’s neck. They’ve got some cool movements and what looks like puppetry. There is a lot of skill being shown here, but I’m simply not as entertained by them as I was their competitors. Derek says his butt was clenched from the beginning and they had amazing execution. J-Lo calls it “risky,” but they were pushed into a box with their props. Finally, it’s time for the results. By a vote of 2-1, Jake & Chau win this Duel and advance to the semi-finals.

10:30 p.m. — Next up is a Duel between Geometrie Variable and Oxygen. These are two Upper Division groups that are able to tell stories through pictures made with their bodies. Geometrie Variable are up first and they kick things off with their signature shape-shifting with their arms. It seems so simple but these guys are fascinating to watch. They utilize every part of their bodies and from their feet to their jaw movements. Yes, I said jaw movements. Ne-Yo had no critiques. J-Lo calls it “so much fun to watch.” Derek calls it “surgical” and says they’ve never had anything like this on the show before.

10:40 p.m. — It’s time for Oxygen to prove they deserve to win this Duel. There are nine of them so there’s a lot going on which is fun to see. They are dressed in bright colors and use facial expressions to convey a bit more “fun” in this performance. They’re incredibly skilled, but I have to admit, I was more drawn into the performance from Geometrie Variable. Ne-Yo felt like they lost a little of their identity in this performance. J-Lo calls it a good routine, but it didn’t push boundaries. Derek thinks they lost their “special sauce.” By a vote of 3-0, Geometrie Variable won this Duel.

10:50 p.m. — The Upper Division Duels have concluded and now Twitch must select two of the eliminated acts to go head to head for one final chance to advance to the semi-finals. J-Lo pleads with him not to “screw it up.” He heads backstage for the moment of truth and makes his selection. Competing in the Redemption round will be Styles & Emma and Oxygen. J-Lo and Ne-Yo are happy, but Derek was hoping The Rise would be back.

10:55 p.m. — Styles & Emma are up first and almost instantly draw screams from the audience as they show off their ridiculous flexibility. These two are so graceful and they just fly across the stage. Despite his initial disappointment that The Rise was not selected, Derek is on his feet for this duo and can’t believe what he’s watching. “Why was this not their first routine?!” he exclaims.

10:59 p.m. — Oxygen is up next for their final shot at Redemption. I love their blue hats and gloves — they almost look like they’re glowing int he dark even though they are under stage lights. They show off some fast feet and their signature geometric shapes and once again the judges are blown away. J-Lo says it had more precision than most things we’ve seen in four seasons. The judges critique both acts for not bringing their best feet forward before now. It’s disappointing we have to lose either of these acts, but it’s time to make a decision. After a quick huddle, the judges have decided Oxygen is the winner of this Redemption Duel. They will move on to the semi-finals and Styles & Emma have been eliminated. That’s a wrap for tonight!

'The Pit Stop' for 'RuPaul's Drag Race All Stars 7' episode 7: Bob and Willow Pill are 'master…

'RuPaul's Drag Race All Stars' episode 7 recap: Another design challenge heats up the competition in…