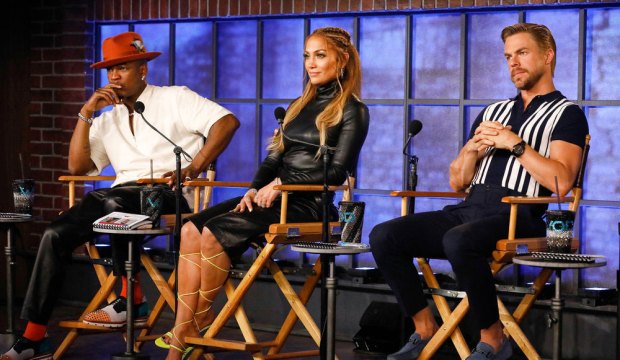 The “World of Dance” Duels are half over. The Upper Division ended their head-to-head battles on July 14, so it was time for the Junior Division (consisting of dancers under the age of 18) to face off on July 21. So which kids and adolescents rose to the top, and who still had some growing up to do? Scroll down for our live blog with all the minute-by-minute developments as they happen.

The Duels are pretty simple. Two acts are pitted against each other, and judges Jennifer Lopez, Ne-Yo and Derek Hough decide who wins and advances to the Semi-Finals. Majority rules, so you only need two of them to pick you in order to advance. But there’s still a chance to move forward even if you don’t win your Duel. Guest judge Stephen “Twitch” Boss, of “So You Think You Can Dance” fame, gets to pick two losing acts who deserve another chance. They compete against each other in a redemption round to decide who gets the final spot in the next round.

The Upper Division Duels ended with six acts moving on to the Semi-Finals. Jefferson y Adrianita, UPeepz, Kurtis Sprung, Geometrie Variable and Jake and Chau won their Duels outright, so they advanced automatically. Oxygen lost their Duel, but Twitch selected them for the redemption round, which they won, earning them the sixth spot.

So who got the upper hand in the Junior Division, where acts range from pint-sized jazz dance prodigy Savannah Manzel to teenage contemporary dancers MDC 3? And will one of these acts eventually follow in the footsteps of The Lab, who were the first Junior Division act to win the million-dollar grand prize? Follow along below starting at 10:00pm (times listed are Eastern).

SEE‘World of Dance’ redemption round: Styles and Emma saved the best for last, but was it too little, too late? [WATCH]

10:03pm — Time for the second half of the Duels to begin. There are definitely some dancers with the potential to win the  whole competition here. The first dancers going up against each other are GRVMNT and The Young Cast. Lopez likes them because they’re both talented hip-hop groups, and both of teams needed a callback to advance to the Duels. And at least one of them will get to the Semi-Finals, maybe both depending on how the redemption round goes.

10:08pm  — GRVMNT are up first with a challenging routine to Eminem‘s “Godzilla.” An ambitious choice given how well it’s known for the blistering speed of Eminem’s rapping. “Damn!” says Lopez mid-routine. And it ends with a badass taunt to their opponents. Hough loved the “intricacy” and “musicality” of their performance. Lopez thinks it might be a record for the most moves in a 90-second routine. But the judges thought they lost some stamina towards the end. So the door is open for The Young Cast.

10:12pm — The Young Cast follow that up with a performance to “Come Thru” by DMX and Busta Rhymes. They answer back with a lot of aggression and a little throat slash at the end. They seem pretty evenly matched, so it’s hard to say which one has the edge. Lopez thought the two teams both rose to a level that was “world-class,” and she didn’t know they had it in them. She calls it a battle between “stank and groove” and “formations.” Hough thought their strength was in those formations, while their showcase moments didn’t work quite as well. Ne-Yo didn’t think the tricks really landed with the Young Cast. Could go either way.

10:14pm  — Hough picks The Young Cast as his winner. Lopez goes with GRVMNT. So Ne-Yo is the deciding vote, and he picks … GRVMNT! But there’s a decent chance The Young Cast could get one of those redemption slots. Too early to tell, though, since this is the first Duel for the Junior Division.

10:22pm — After an interlude focusing on Hough and his love of sparkling rhinestone costumes comes the next duel: Savannah Manzel vs. 305. It’s an odd match-up putting a solo jazz dancer against a team of Latin dancers, but the nine-year-old Manzel has such athleticism that the judges thing she’s a good match for these opponents. But the judges also wonder if Manzel has the emotional connection to the music to make it farther in the competition. Meanwhile, the judges think 305 need to add more interesting, innovative moves to their arsenal. Manzel says she’s “ready for a fight,” and her “mean face” is predictably adorable.

10:26pm — 305 is up first. A lot of intensity from them, lots of theatrics, but Manzel might be able to bring more technique by herself than the whole group combined. 305 end their routine by getting right up into little Manzel’s face, and she’s not fazed at all. Ain’t nuthin’. Hough thought 305’s performance was “well done” with its “fiery paso doble battle mode.” Lopez admired them too, but she did think it could’ve been better. Twitch thinks they have “work to do” too. Ne-Yo says they have “potential,” and it’s pretty late in the competition to still just have potential. This might be Manzel’s for the taking.

10:27pm — Manzel’s killing her routine with incredible flexibility, innovative movements, but then there’s a mishap where the dancer’s mic pack slips while she’s in an intense spin and it looks like it’s hanging off her leg, and then … commercial break!

10:35pm — Show’s back, and they have Manzel stop her routine and take off her mic pack before he trips and injures herself. She starts all over and brings the same intensity and composure on her second attempt. Feels like an easy win for Manzel to me. And she gets a standing ovation from the judges. She reminds me the most of the great soloists of past years like Eva Igo and Michael Dameski. Lopez admits she worried about Manzel’s depth of feeling, but she thought the way she fought back proved her grit and emotionality. Ne-Yo’s only criticism was that Manzel should work on adding more dancing between her amazing tricks. Hough is also wowed by her athleticism.

10:36pm — Moment of truth. Lopez picks Manzel as the winner. Ne-Yo picks Savannah Manzel too after making it sound like it was a really tough decision, but I suspect it wasn’t really that close. I don’t think we heard Hough’s verdict, but those two Manzel votes made it a done deal for the youngster. I love 305, but they need time to add more to their choreographic arsenal. They have the attitude, they just need to level up their technique a little more.

10:43pm — MDC 3 vs. Chibi Unity is the last Duel of the night. They’re pitted against each other because of the strength of their choreography. MDC 3 are going to continue their “story of heartbreak and betrayal” that they started with their routine from the Qualifiers. Chibi Unity got a note from the judges during the Qualifiers that they needed to start their routine with more intensity right away, so that’s what they plan to do. My gut tells me MDC 3 have a slight advantage in this match-up.

10:46pm — Chibi Unity are up first with a solid hip-hop routine, good tricks, nice and clean, good synchronicity. Hough thought they were “so clean” and “so together.” Ne-Yo was surprised to see straight-up hip-hop from a group that seemed to be more contemporary in the first round. Twitch is worried about the group losing their identity, especially since they say themselves that their strength is in contemporary dancing. However, Lopez said they blew her away. They have a chance, but we’ve seen a lot of hip-hop crews, so it takes a lot more to really stand out, and I feel like MDC 3 bring something more unique to the table.

10:53pm — MDC are the last performance of the night and get a standing ovation from the judges, so I’m gonna say they don’t have the slight edge on Chibi Unity. I think MDC 3 have this in the bag. Hough loved how the routine was a continuation of their first performance. And Ne-Yo says, “There’s nothing better than quality storytelling.”

10:58pm — Ne-Yo’s vote goes to Chibi Unity, which surprises me a little. But Lopez picks MDC 3, so it down to Hough to cast the deciding vote. And he picks … MDC 3! Whew, the judges had me worried for a second there. I didn’t expect that to be a close call. Chibi Unity could get one of those redemption slots, especially if Twitch is intrigued enough to want to see more of their contemporary side.