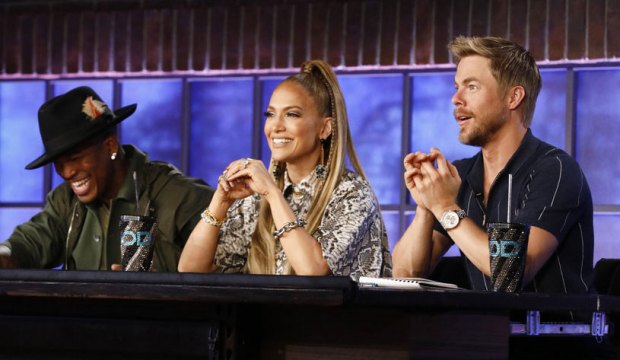 “World of Dance” continued its fourth season on Tuesday night, June 9, with its third week of Qualifiers during which judges Jennifer Lopez, Ne-Yo and Derek Hough surprise competitors with their presence at what they think are supposed to be auditions for producers. So who withstood the shock and still delivered world champion-worthy performances? Find out below in our live blog with all the minute-by-minute developments as they happen.

SEE‘World of Dance’ sneak peek: Josh and Erica give a ‘powerful’ performance, but Ne-Yo thinks something is missing [WATCH]

This season the judges don’t give their usual scores from 0 to 100 during the Qualifiers. Instead, you only need to get a yes from a majority of them to advance to the next round, the head-to-head Duels. But that doesn’t mean the judges are pushovers. They’ve already rejected two acts outright: the sibling hip-hop crew The Williams Fam and the Native American dance team Indigenous Enterprise.

And in last week’s “Qualifiers 2,” two other acts were given callbacks: hip-hop team The Rise and Latin ballroom team 305. Callbacks are new this season, and they mean that the judges aren’t quite convinced the contestant has what it takes, but they have enough potential for the judges to want to see them perform again before they make their final decisions.

And some dancers who have advanced to the next round so far have been close calls. Just how high have the judges set the bar this season? Consider that the UPeepz, made up of the adults who coached the season three world finalists VPeepz, only got two outright yeses while Lopez thought they still had to prove themselves in a callback. If your proteges nearly win the million-dollar grand prize, but you barely make it out of the Qualifiers, you know it’ll take something spectacular to win.

Which performances did you like the most during “The Qualifiers 3”? Which judges’ decisions did you disagree with? Follow along below starting at 10:00pm (times listed are Eastern).

8:05 p.m. — The first dancer to hit the audition stage tonight is Keagan Capps, a 13-year old contemporary dancer from Moore, Oklahoma competing in the Junior Division. She thinks people underestimate her abilities because she’s from a small town, but Keagan is ready to prove she can make her dream happen. She begins her routine displaying the flexibility of a contortionist, but soon proves she’s a fierce dancer as well. The shapes Keagan can make with her body are incredible. Derek complimented her control, Ne-Yo thinks she proved to be more than a contortionist and J-Lo is ready to see more. It’s a yes to Keagan from all three judges and she’s on to the Duals!

8:10 p.m. — Next up are Antonio & Maria, a Latin Ballroom duo all the way from Naples, Italy competing in the Junior Division. They met when they were very young and have grown up dancing together like siblings. They are just 11 and 13 years old but have no problem delivering the goods on stage. That being said, Derek doesn’t think they’re mature enough for this stage and the judges decide to send them home. The young duo wasn’t phased and said they’ll be back next year. Also falling short of a “yes” was the Avant Garde Collective, a hip-hop group from Amsterdam, Netherlands competing in the Upper Division. Although they had great costumes and incredible tricks, J-Lo gave them a thumbs down, Ne-Yo liked them and Derek made the decision to send them to the callbacks.

8:15 p.m. — Hoping for better luck is a Junior Division fusion dance crew from Niigata, Japan called Chibi Unity. They are an excited group of kids who exude pure energy and joy when they speak. They’re wearing plain white costumes that look like they’ve been splattered in paint. Their synchronicity is impressive and J-Lo called the choreography a real “standout.” Derek loved the feeling, but didn’t think their tricks were exciting enough. Despite the critiques, all three judges gave Chibi Unity a “yes” and they’re heading into the Duals. It’s hard not to smile watching this group. Their joy is infectious!

9:25 p.m. — Josh & Erica are an urban dance duo from Los Angeles, California competing in the Upper Division. Erica competed last year with another dance partner and the judges felt they lacked chemistry. This season she’s back with her boyfriend and they plan on sizzling on stage. I love their quick, mechanical movements and there definitely is no lack of chemistry here. That was smokin’! J-Lo says they have very strong moves and musicality. Ne-Yo likes how hard they hit, but didn’t think they were always equal. He says he wants to see them in a callback, but J-Lo and Derek decide to send them straight to the Duals.

9:35 p.m. — The Break Ninjaz are a group of breakers from Las Vegas, Nevada competing in the Junior Division. They describe themselves as athletes who work hard, have fun and help each other. They vary in age from little kids to teenagers but have managed to make the choreography work for all of them. They’ve got some solid tricks, but it’s nothing terribly unique. Derek thinks they need to improve their transitions. J-Lo needs them to rise to another level. All three judges give them a “no” but encourage them to keep working and come back next year.

9:40 p.m. — The Young Cast is a group of hip-hop dancers from Quebec, Canada competing in the Junior Division. They’ve been trying out since Season 2 but this is the first time they’ve made it to this stage. They put together a lot of formations, but it’s just not terribly exciting. It seems like there are just too many young dancers tonight. I would like to see more variety. J-Lo didn’t think they actually danced enough and said there was a lack of musicality. The Young Cast is sent to a callback, so they still have a chance to make the Duals.

9:50 p.m. — Next up is MDC 3, a contemporary trio from Placentia, California competing in the Junior Division. They’ve been dancing together since they were kids and now, as teenagers, they have been each others’ support system through both triumphs and tribulations. When these three hit the stage it’s like a breath of fresh air after a night of mediocre performances. Each of them are stunning in their own right and their emotions are on full display. The judges complimented their transitions and chemistry, so it’s a big YES to this trio. That was the performance of the night!

9:59 p.m. — Last up tonight is a jazz/funk group from Miami, Florida called Show Stopper. They’re competing in the Upper Division and are all first-generation American women. They’ve all got their own unique look as well as their own unique story. In their routine they show off beautiful formations while maintaining a fun, colorful energy throughout. J-Lo thinks they’re a cohesive group, but thinks they need to hit a little bit harder. She’s concerned their outfits hid too much of their bodies. The passion was there but the skill wasn’t. Ne-Yo says they shouldn’t call themselves Show Stopper if they’re not ready to stop the show. Ouch! It’s tough love for this group and they’re heading to a callback. We’ll have to wait and see if they make the Duals. That’s a wrap for tonight!