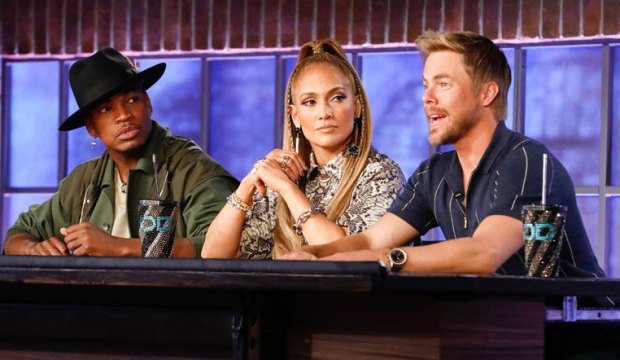 The “World of Dance” season four Qualifiers continued on Tuesday night, June 16. So which acts impressed judges Jennifer Lopez, Ne-Yo and Derek Hough enough to advance to the next round, the Duels, who did they invite for a callback, and who did they eliminate outright? Find out below in our live blog with all the minute-by-minute developments as they happen.

In past seasons the Qualifiers have taken place on the show’s main stage with the judges evaluating contestants on a sliding scale from 0 to 100. The show changed things up this year, though. Now the judges are surprising this year’s hopefuls at what they think are supposed to be auditions for producers of the show. That’ll show the judges if the dancers can stay cool under pressure. And instead of scoring the performances, the judges are just telling them yes or no, or inviting them for a callback if an act has potential but their performance wasn’t entirely convincing.

SEE‘World of Dance’ exclusive video: Kurtis Sprung comes from Cirque du Soleil, but is he passionate enough to captivate the judges? [WATCH]

It’s not as easy to get a yes from the judges as you might think. Out of the nine acts featured last week in “The Qualifiers 3,” only four immediately advanced to the next round: contemporary dancer Keagan Capps, fusion team Chibi Unity, urban duo Josh and Erica, and contemporary trio MDC 3. Three others got callbacks: Hip-hop crews Avant Garde Collective and The Young Cast and jazz team Show Stoppers.

The last two, Latin ballroom duo Antonio and Maria and breaking crew The Break Ninjaz, were given their walking papers, though the judges are always encouraging of young dancers to further hone their craft and try out again in a future season. So how tough were Lopez, Ne-Yo and Hough on this week’s competitors? Follow along below starting at 10:00pm (times listed are Eastern).

8:07 p.m. — The first act tonight is Geometrie Variable, a tutting crew from Montpellier, France competing in the Upper Division. They consist of an electrician, a plumber and a salesman. One day they came together with hopes of becoming artists and decided to get working on their dream before they turned 40. They creatively use their body to create various shapes and it’s mesmerizing to watch. This definitely isn’t a style we see all the time, but it’s fun! J-Lo think it looks “tiring,” Ne-Yo felt it was entertaining and Derek decided they all need a lesson — so they’re getting one! After the judges try their best creating their own tutting moves they give Geometrie Variable a big YES! They’ll advance to the Duals.

8:15 p.m. — Next up are the Gigabots, a popping group from Vancouver, Canada competing in the Junior Division. They merged with another group from last season, Funkanometry, but they’re all back a few inches taller and determined to prove they’re better this time around. They are sharply dressed and making nice use of their hats and suspenders as props. This crew has some slick moves and a fun energy about them that leaves the judges grinning from ear to ear. J-Lo liked the various standout moments, but doesn’t think they’re as strong as last year. It’s a no from her and Derek, even though Ne-Yo thought they deserved a callback. Unfortunately, they’re sent packing in tears. Ne-Yo gives them some inspirational words and tells them to keep working.

8:20 p.m. — Maddy Penney is next to take the stage and she’s a 15-year old ballet dancer from Mesa, Arizona competing in the Junior Division. She says she goes against the grain and isn’t a typical ballerina. She wants to show the world that ballet doesn’t have to be boring and she Maddy hopes to be the first ballerina to win “World of Dance.” She’s dancing to contemporary music and this feels like more like a contemporary/ballet fusion. J-Lo thinks the combination of styles but wants more emotion. Ne-Yo thinks Maddy is all technique but needs more personality. J-Lo says yes, Derek says no and Ne-Yo thinks she deserves a callback. J-Lo convinces Ne-Yo to come over to her side and they decide to put Maddy through to the Duals.

8:30 p.m. — The next group is CBAction, a street dance group from Argentina competing in the Upper Division. They’re emotional when they meet the judges because one of their crew members broke his leg in rehearsals and is unable to dance today. They had to reconfigure their dance, but they’re more heartbroken about their friend’s inability to compete. Regardless of the situation, they’re determined to continue. This routine is so much fun and not what I was expecting from this group. It’s super campy and I don’t know how anyone could watch this without smiling. The judges are laughing, but do they think they’re qualified to advance to the Duals? J-Lo enjoyed the choreography and Derek was impressed with the last-minute changes. But after all the emotion, CBAction will have to go to the callbacks.

8:40 p.m. — A short clip of a Junior Division group called The Difference is shown, but all we really see is Jennifer giving the Carol Stream, Illinois dancers a callback. Itty Bitty Crew from Edmonton, Canada is given a no as is Junior Division soloists Amari Smith and Willis. An Upper Division group of women called Pumpfidence is sent to a callback. Junior Division dancers Project 21 get more airtime and I love their Cinderella-in-her-rags costumes as they dance to “Rich Girl.” They were the most entertaining in this montage, but even for them it’s a callback! These judges are tough.

9:55 p.m. — Kurtis Sprung is the next featured dancer and he is from Caroga Lake, New York and dancing in the Upper Division. This contemporary dancer grew up in a small town and was frequently bullied for being in dance. Even though people were cruel to him for dancing, it was also his escape and he never stopped loving it. During his audition he shows great technique and gets some serious height on his back flip. He’s got some serious skills! Derek found his movement awkward, but in a cool way. In other moments he wasn’t completely drawn into the performance. Jennifer says Kurtis is cutting himself short in some of the movements. Ne-Yo didn’t feel any emotion from the dance. Despite the harsh critiques, it’s a yes for Kurtis!

9:59 p.m. — Qualifiers have concluded and it’s now time for callbacks! Six acts will be sent home after each act in the callbacks return. The Rise, an Upper Division hip-hop group is first up — but we won’t see the performance until next week! That’s a wrap for tonight.