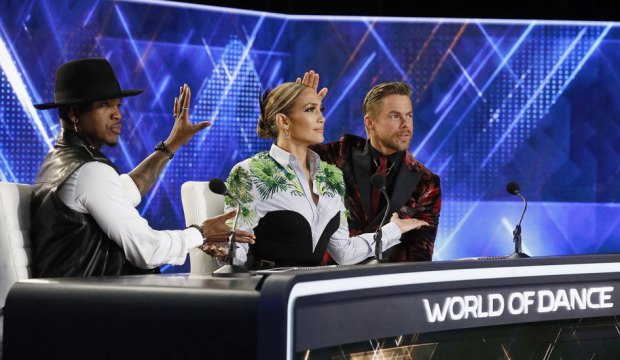 We’re nearing the end of “World of Dance” season four. Tuesday night’s “The Semi-Finals 2” was the penultimate episode, and it decided who would advance to the World Final the very next night. So who got the nod from judges Jennifer Lopez, Derek Hough and Ne-Yo? Scroll down for our live blog with all the minute-by-minute developments as they happen.

In last week’s “Semi-Finals 1,” salsa duo Jefferson y Adrianita and dark horse French team Geometrie Variable earned the first two spots in the World Final, outscoring contemporary soloist Kurtis Sprung, nine-year-old jazz dancer Savannah Manzel and Canadian hip-hop crew The Young Cast and GRVMNT. Both teams that advanced that night were from the Upper Division. No one from the Junior Division has yet qualified for the last round.

But three more had a chance tonight. The contemporary trio MDC 3, hip-hop duo Bailey and Kida and contemporary/ballet soloist Keagan Capps represent the under-18 set in the hopes of making it to the million-dollar finale. They’re up against three acts from the Upper Division: the Filipino hip-hop team UPeepz, the contemporary duo Jake and Chau and fusion group Oxygen.

Each of those six acts performed once. Then the judges scored them on a scale of 0 to 100. The two acts with the highest average scores advance to the World Final, while the other four were eliminated. Last week Jefferson y Adrianita and Geometrie Variable scored 94.3 and 94.0, respectively, so if those numbers were any indication, the bar was set pretty high to make it to the season finale. But we should expect nothing less for a competition where the grand prize is $1 million. Follow along below starting at 10:00pm (times listed are Eastern).

10:08 p.m. — First to take the stage tonight is Keagan Capps, a contemporary soloist who plans to bring a different side of herself to the judges tonight. Tonight she’s performing a piece about a tornado that struck down on her hometown in Oklahoma, hoping to honor the lives that were lost. She emerges onstage with a confident, fierce look and immediately goes into a standing split before doing all kinds of crazy things with her body. I’m blown away by her flexibility and technique, but I’m not sure she stands out enough for me to consider her the “best in the world.” J-Lo is surprised by her strength and agility. Derek and Ne-Yo thought the musicality was a bit off, but everyone agrees she’s amazing. Keagan’s final score is 90.7.

10:15 p.m. — The second act tonight is the Filipino hip-hop team, UPeepz. They’re feeling good about their next performance because it showcases their own, unique flavor as well as their culture. I’m instantly pulled into this performance because they have such tight, quick movements perfectly in sync. I love that there’s a touch of humor to this routine, but the talent is definitely no joke. This was so much fun! Derek loves how they brought culture into this piece, but felt it started a little slow. Ne-Yo loved how they pulled out some fans, but was confused by the bamboo. J-Lo thinks they’re a strong group and says they “really feel like a crew.” For whatever reason, she didn’t feel the routine came together. I can’t believe how negative the judges were about this routine! I loved them. The final score for UPeepz is 89.0, putting them in second place.

10:25 p.m. — Jake & Chau are the third act tonight. This contemporary duo is known for their fluid, emotional performances and Derek says they have the full package. Tonight they’re performing a romantic piece that they feel tells a more complete story than their previous performances. There is a grace and sensuality to this performance that pulls me in as a viewer. It looks effortless. I was drawn in more by Chau until Jake did a back flip over her laid-out body and landed on top of her, while avoiding crushing her! J-Lo got goosies and was completely shocked by their performance. She called it the best Semi-Final performance so far. Derek called them “exceptional” and loved the danger aspect. Ne-Yo said it “felt like love” and he can see the level of trust they have for each other. The final score for Jake & Chau is 95.3, putting them in first place. UPeepz has officially been eliminated.

10:35 p.m. — Next up is hip-hop duo Bailey & Kida. They’ve only been dancing together for a short while and the judges have questioned their chemistry in the past. Tonight, they’re determined to show the judges that they’ve grown and deserve a spot in this competition. They’re wearing matching, zany black and white outfits and are definitely fun to watch. I’m not sure how the judges will react, but for me they were two of the most fun dancers of the night. Ne-Yo felt the prop of a chair worked against them. Derek thinks they stepped up their game and J-Lo called them two of the best hip-hop dancers of the season. The final score for Bailey & Kida is 93. Wow! That’s a huge score and it moves them into second place, knocking out Keagan Capps.

10:45 p.m. — Fusion group, Oxygen is up next and they are thrilled to finally perform on the main stage. The Duels did not go as planned for them, but they survived by winning Redemption. They have brought out a table to use as a prop, but it’s working to their advantage. These shapes they make are fascinating and so much fun to watch! They then move into some hip-hop dancing and finish it off with more shape shifting. That was HOT! This may be the best of the night and the judges are all on their feet. Ne-Yo called it “moving art” that we almost didn’t get to see! J-Lo could feel the choreography and can feel how much they want it. Derek called it “theatrical” and loved the varieties of dance they incorporated. The final score for Oxygen is 96.3, moving them into first place and guaranteeing them a place in the Finals. Unfortunately, that means Bailey & Kida have been eliminated.

10:59 p.m. — The final act of the night is MDC 3. They will need to score higher than 95.3 to make it to the Finals. The contemporary trio says this competition has challenged them and brought them to new heights. The story of tonight’s piece is about the journey of one of the girls’ mother and her struggle with cancer. They’ve made a brilliant music choice with Maxwell‘s “This Woman’s Work” and the way these three dance together is simply gorgeous. It’s not typical for two women and one man to form a contemporary trio like this, but it works and it’s powerful. J-Lo has tears in her eyes and Derek is on his feet. J-Lo calls them “the most incredible dancers” and feels speechless, but then goes on to speak about the high level of emotion and intensity. Derek says Madison, Emma and Diego are all stunning individually but having all three of them together is a gift. Ne-Yo says this is just the second time in “World of Dance” history that he’s gotten the goosies. The finals score for MDC 3 is 96.7, putting them in first place! They advance to the Finals along with Oxygen. Jake & Chau have been eliminated. Tomorrow night is the grand finale! Jefferson Y Adrianita, Geometrie Variable, Oxygen and MDC 3 will compete for the grand prize.