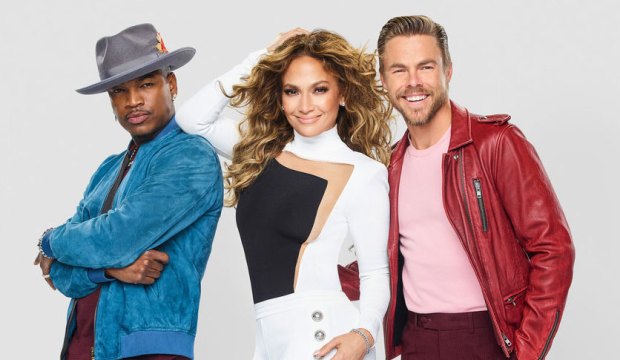 “World of Dance” premiered its fourth season on Tuesday night, May 26, with returning host Scott Evans and returning judges Jennifer Lopez, Derek Hough and Ne-Yo. But there’s a new lineup of contestants vying for the million-dollar grand prize and a new twist right out of the gate. So what were the highlights and lowlights of the first night of competition? Scroll down for our live blog with all the minute-by-minute developments as they happen in the season premiere, “The Qualifiers 1.”

The dance competition series normally starts with “The Qualifiers,” during which contestants perform on the big stage hoping to earn enough points from the judging panel to advance to the next round. But this time the acts don’t start out in the glitzy studio where the show usually takes place. Instead Lopez, Hough and Ne-Yo surprise this season’s hopefuls in the warehouse set where they think they will be performing for producers as their final pre-air audition. So these Qualifiers will determine not only who has the dance skills to succeed, but who can adjust to surprises and who can bring their A game at a moment’s notice.

That’s tough enough even when you are expecting an audience with Jennifer Lopez. Every season the standards get a little bit higher, with season 3 champs The Kings performing the kinds of stunts that could’ve qualified the show for Best Visual Effects consideration. The show earned four Emmy nominations for Best Choreography last year, winning for Tessandra Chavez‘s work with Unity LA, who were season three’s runners-up, which is a testament to how advanced the level of these routines usually are.

SEE‘World of Dance’ season 4: Will hip-hop continue its undefeated streak?

So who stood out with world-class routines tonight? Do any of them look like potential winners already? Follow along below starting at 10:00pm (times listed are Eastern).

10:00 p.m. — Season 4 of “World of Dance” begins now and auditions will take place in a warehouse as opposed to the big stage. Dancers will have to earn that big, beautiful stage this time around and Jennifer Lopez, Derek Hough and Ne-Yo are ready cast this season of dancing superstars.

10:10 p.m. — Up first are Jefferson Y Adrianita, a salsa duo from Cali, Colombia participating in the Upper Division. They’ve been dancing together for 17 years, but involved romantically for five. They’ve won many competitions around the world but taking the title on “World of Dance” would be the ultimate prize. They kick things off with a complex hold before spinning and kicking at lightning speed. These two are fierce! Jefferson isn’t very big but he throws Adrianita around like she’s weightless. Ne-Yo called it “slick, tight and effortless.” Jennifer says they need even faster footwork and they aren’t up to championship level. Derek says they need to add some surprises and then gives Adrianita some private lessons. The judges give them a unanimous “Yes” and Jefferson Y Adrianita have advanced to the Duals.

10:20 p.m. — Next up is GRVMNT, a hip-hop group from Vancouver, Canada competing in the Junior Division. They describe their style as high energy, sharp and high octane. GRVMNT is a close-knit crew and they aren’t afraid to throw in some daredevil moves. As promised, they deliver on energy and have some solid acrobatics. The bar is so high in this type of dance, it’s almost hard to be impressed despite how great these kids are. Derek felt the energy dip at certain points of the performance, Ne-Yo enjoyed it but agreed there were some flat moments and Jennifer felt they need to raise their level, but had encouraging moments. GRVMNT is held for a “callback” by Ne-Yo and Derek after Jennifer gives them a “Yes.” That means they have to basically audition one more time before they advance to the Duals.

10:30 p.m. — At the halfway point in tonight’s episode, Jake & Chau are in the hot seat. This contemporary duo from San Jose, California is competing in the Upper Division. Chau is a bit of a contortionist which should allow for some interesting moves. This pair has impressively fluid movement and I love how they incorporate unexpected tricks (like the sneaky way Chau ripped off Jake’s shirt). Derek called it “beautiful” and “stunning,” Ne-Yo loves their chemistry and Jennifer thinks they’re pretty special. They’re heading to the Duals!

10:40 p.m. — Up next is is The Williams Fam, a hip-hop group from Vallejo, California competing in the Upper Division. And in case anyone is interested, they’re all single and ready to mingle. They work as social media influencers and have over 2 million followers between the four of them. After a corny warm-up, J-Lo is giving them a bit of a death stare and I’m not sure she can take them seriously. Once the routine starts they actually prove to have some skills, but I’m not sure they’re good enough to stand out in this competition. It’s more of a comedy act. Derek says it’s fine for social media, but not a $1 million competition. Ne-Yo and Jennifer agree and The Williams Fam has been eliminated. At least they’ll gain some more followers now that this has aired.

10:50 p.m. — Bailey & Kida are a hip-hop duo from Los Angeles, California and they’re competing in the Junior Division. They’re both pretty popular on social media and Bailey has performed with the likes of Janet Jackson and Jason Derulo. Kida has danced with acts like Usher and Kendrick Lamar, but I recognize him for winning “So You Think You Can Dance” when he was just 14 years old. I love the personality these two bring to the show and J-Lo says they’re great performers. She says they can tell they haven’t danced together very long, but the potential is there. It’s a unanimous “Yes” for this pair to go on to the Duals.

10:59 p.m. — The last act of the night is a spunky, nine-year old jazz dancer named Savannah Manzel. She is from Lake Elmo, Minnesota and competing in the Junior Division. This youngster has a ton of energy and isn’t phased at all when she sees the three judges. The smile never leaves her face as Savannah flips, twirls and shimmies around the stage. J-Lo calls her strong, athletic and flexible. Ne-Yo says the bar has been raised and her skill level is well beyond her years. It’s a huge “Yes” for Savannah and she’s sailing into the Duals. That’s a wrap for tonight!

MAKE YOUR PREDICTION: Which dance style will win?
To save your prediction, you must log in to Gold Derby. Click here to sign in with existing account -- or create a new one.
PREDICT‘World of Dance’ now; change them until the show airs on Tuesday nights