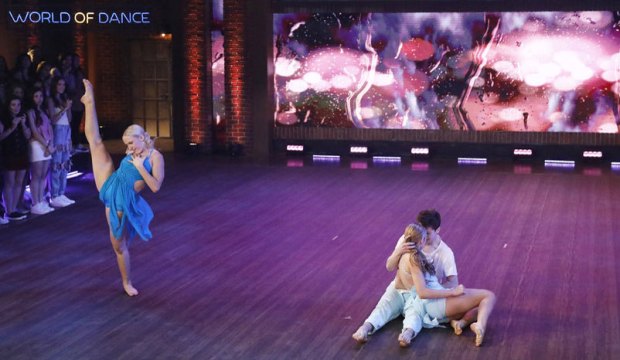 The Upper Division team Oxygen led our early “World of Dance” predictions for who would win the million-dollar grand prize at the end of the season, but the balance of power has wildly shifted in our odds since the Junior Division dancers started their Duels on July 21. Now the contemporary trio MDC 3 are the front-runners to win according to the combined predictions of fans who have been making their forecasts every week here in our predictions center.

The members of MDC 3 — two girls and a guy — impressed the judges during the Qualifiers round with a routine that told the story of a contentious love triangle. Judges Jennifer Lopez, Derek Hough and Ne-Yo consistently praise routines with a clear narrative arc and emotional intent, so the trio savvily picked up right where they left off during the Duels — literally. They began this routine in exactly the positions they ended the first one in. But part two of this love story ended with both young women leaving their love interest in the dust for stringing them along. I can’t wait for part three.

SEESavannah Manzel (‘World of Dance’ Duels) was almost taken down by a rare mishap, but was she able to recover? [WATCH]

MDC 3 were pitted against Chibi Unity for this duel, and MDC 3 were victorious, though it wasn’t unanimous. Ne-Yo picked Chibi Unity to win after admiring their drastic stylistic change-up from round to round. But Lopez and Hough voted for MDC 3, which means they’re headed straight for the Semi-Finals under the bright lights of the “World of Dance” main stage. And as of this writing they get leading 57/20 odds of winning the whole competition. They’re followed by Upper Division salsa duo Jefferson y Adrianita with 19/5 odds and another Junior Division contemporary act, Jake and Chau, with 5/1 odds.

Oxygen are in sixth place now with 22/1 odds, perhaps because they almost didn’t make it out of the Duels at all. They lost to Geometrie Variable, but guest judge Stephen “Twitch” Boss selected them for the redemption round, which they won. It just goes to show that things can change quickly on “World of Dance.” Tonight the Junior Division Duels conclude with performances from Bailey and Kida, James and Harris, Maddy Penney and Keagan Capps. So this time next week one of them might be the new “World of Dance” front-runner depending on how well they perform.