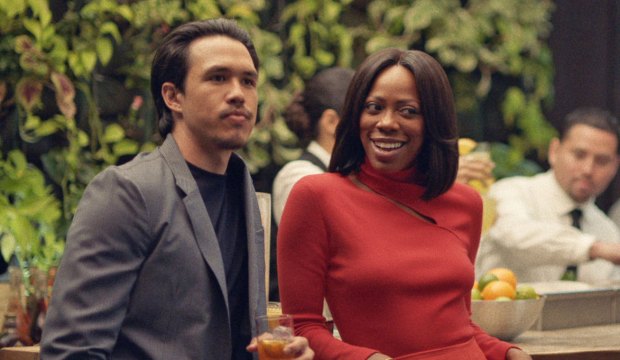 Months before Verzuz had fans declare if they were #TeamBrandy or #TeamMonica, season four of “Insecure” had fans choosing between #TeamIssa and #TeamMolly. However, Emmy voters decided they were fans of both characters as actresses Issa Rae (Issa) and Yvonne Orji (Molly) earned two of the show’s eight Primetime Emmy nominations this year. While Rae has previously been nominated, this marks the first bid for Orji who is up for Best Comedy Supporting Actress. For her submission to the Emmy judges, Orji has chosen the season four finale, “Lowkey Lost,” which finds Molly at crossroads in two of her closest relationships.

In this jam-packed finale, we first see Molly and her boyfriend Andrew (Alexander Hodge) attend a happy hour function for the law firm where Molly works. After coming home Andrew decides to confront Molly about her selfish behavior as it pertains to their relationship. During the middle of their disagreement, Kelli (Natasha Rothwell) calls Molly informing her that Tiffany (Amanda Seales) is missing.

Molly arrives at Tiffany and Derek’s (Wade Allain-Marcus) house where Kelli, Tiffany’s family and Issa are waiting. Derek, Kelli, Issa and Molly team up to go find her. The group first hit the movie theater where we see the awkwardness between Issa and Molly that had been a driving force throughout this season. In one of the episode’s most touching moments, both Issa and Molly confront a guilt-ridden Derek on the bus.

After finding Tiffany safe and sound, Molly returns to the apartment to continue the conversation she and Andrew had started. It is in this scene where we see the often strong and stubborn Molly become vulnerable as she tries to fight for her relationship with Andrew. The episode concludes with Molly and a heartbroken Issa, sitting together at a restaurant, which looks like the first step in reconciling their friendship as they deal with their lost romantic relationships.

In this episode, Orji is able to tap into Molly’s more vulnerable and emotional side. Molly has often been portrayed as strong-minded, independent, stubborn and at times stoic. Kudos to the writers for giving Molly all this character development to play.

With eight Emmy nominations including its first for Best Comedy Series, the show received more love from the TV academy than ever before. That’s a great sign that voters too appreciated Molly’s growth this season in her relationships with both Andrew and Issa.

Molly’s storyline has to share screen time with the emotional bombshell between Issa and Lawrence (Jay Ellis), who has learned his ex is pregnant with his baby, as well as Tiffany’s postpartum depression. Those storylines, in particular Issa and Lawrence’s relationship, had fans buzzing days after the finale aired.

Despite Orji’s background in stand-up comedy, we rarely get to see Molly being fun or lighthearted in this episode. It’s also worth noting that scene-stealer Rothwell provided the comedic relief throughout the episode and for much of the season for that matter. So voters may prefer one of the more broadly comic, laugh-out-loud performances in this category.