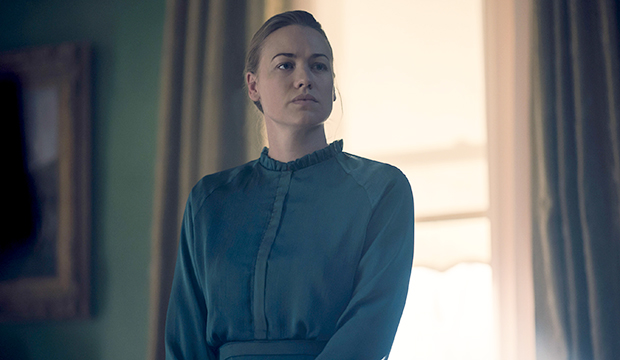 Yvonne Strahovski was blessed with her maiden Best Drama Supporting Actress Emmy nomination in 2018 for the second season of Hulu’s “The Handmaid’s Tale,” and we could now see her return to the lineup for the show’s third season, which aired last summer. As of this writing, she’s only in ninth place in our early combined odds, but — call me crazy — here’s why I’m actually predicting her to win the statuette, and why you should be as well.

Ironically, she could follow in Thandie Newton’s footsteps, who beat her in 2018 for “Westworld’s” second season, after losing to Strahovski’s “Handmaid’s” co-star Ann Dowd for the first in 2017. But Newton’s path to victory isn’t unprecedented, as she’s one of many actors who had to wait until their second go-arounds for their respective shows to triumph. Other recent examples include:

SEE You’ll have to wait a little longer for ‘The Handmaid’s Tale’ Season 4, which will be shorter than usual

Following her Critics’ Choice Award win as well as Golden Globe and Screen Actors Guild Awards bids, Newton quickly arose as the category frontrunner in 2017, which made her loss to Dowd all the more surprising. She was seen as one of the standouts, if not the standout, of “Westworld’s” first season — much like Strahovski was of “Handmaid’s’” second one. The problem for Strahovski, however, was that she faced internal competition in Alexis Bledel and Dowd, both of whom had already racked up hardware for the show (Bledel won Best Drama Guest Actress in 2017). This allowed Newton, who wasn’t nominated alongside any co-stars, to not only capitalize on the three gals splitting the vote, but also on residual goodwill from the first season and another searing turn in “Westworld’s” second season.

Strahovski’s chances of replicating Newton’s path to victory will, of course, depend on whether she’s once more cited alongside any of her co-stars, and if so, how many. While Dowd will remain in the supporting race, Bledel and Wiley will swap categories for the third season, with Bledel dropping back down to guest and Wiley returning to supporting.

What could give Strahovski a leg up over her two internal rivals is that she was able to follow up her Emmy bid with Critics’ Choice and Golden Globe noms, which Dowd did not receive despite winning the former award and being nominated for the latter just one year earlier. Plus, of all three, she’s the only one who has yet to rack up hardware for the show and the one with the most screen time in the third season. Even though Wiley appeared in too many episodes to submit as a guest, she could suffer from making merely brief appearances, all of which were scattered throughout the season. Conversely, while Dowd has two gigantic showcases in “God Bless the Child” and particularly “Unfit,” her story arc is neither as consistent nor as prominently featured as Strahovski’s.

In the third season, Strahovski further brought her character Serena’s desire of being a mother to life. Although she has several episodes she could choose from to submit for consideration if nominated, it’s the fifth episode “Unknown Caller” that arguably serves as her biggest showcase. As Serena gets to reunite with baby Nichole in an arranged meeting in Canada with Luke (O.T. Fagbenle), Strahovski brings out those qualities in Serena that would make you feel some sort of empathy for her. But by the episode’s end, upon Serena’s abrupt decision to request custody of Nichole, you’re reminded of why she’s one of the show’s most complicated figures. Strahovski has her full range on display, with everything from crying scenes to moments of subtle rage.

With 14 acting noms (for nine different actors), of which six translated into wins (for six different actors), “Handmaid’s” has established itself as an acting juggernaut at the Emmys, which puts Strahovski in an advantageous position. The show is also coming off its third consecutive SAG drama ensemble nom, which shows that despite being dropped by several other guilds — most notably the Directors and Producers Guild Awards — its support from actors, many of whom are Emmy voters too, has not waned.