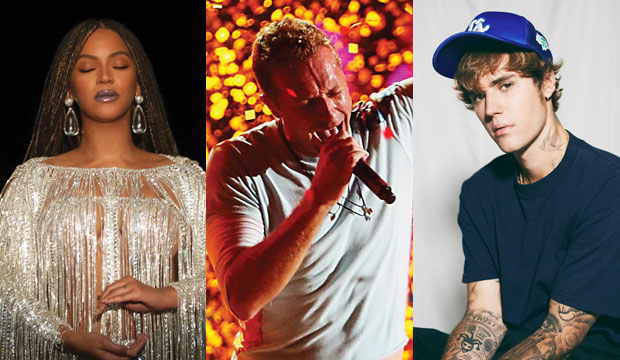 Every year we get a couple of surprise wins at the Grammys. In 2015 many was shocked when Beyoncé’s self-titled album lost Album of the Year to Beck’s “Morning Phase,” while many were just as shocked a few years earlier in 2011 when indie rockers Arcade Fire‘s “The Suburbs” pulled a surprise win against commercial heavyweights like Katy Perry’s “Teenage Dream” and Eminem’s “Recovery.” With the 2021 Grammy Awards already being a little controversial with unexpected noms and snubs across the board, who do we think could surprise us come January 31?

According to our odds, most people are fixed on Taylor Swift’s “Folklore” to win the top prize, with a couple hundred predicting Dua Lipa’s “Future Nostalgia” instead. However, two surprise nominees shouldn’t be underestimated here: Coldplay’s “Everyday Life” and Jacob Collier’s “Djesse Vol. 3.”

Coldplay are the closest to a legacy act nominated with a career spanning 20 years, which could help them get support from older voters. They also have a good relationship with the Grammys, winning seven times over the years including Record of the Year (“Clocks” in 2004) and Song of the Year (“Viva La Vida” in 2009). Not only that, but “Everyday Life” could get votes from rock, alternative, and pop voters alike.

In Collier’s case, his status as a respected prodigy could help him sway jazz and classical voters, achieving an Esperanza Spalding-style upset win against such big names. He also could get votes from R&B and electronic blocs given the sound of the album as well.

SEEThe Strokes (‘The New Abnormal’) were somehow NEVER nominated for a Grammy, but now could win on their first try

The consensus for Record of the Year is “Don’t Start Now” by Dua Lipa. However, watch out for Beyoncé’s “Black Parade” to pull a politically urgent surprise win á la Childish Gambino‘s “This Is America.” The Grammys love Beyoncé, and a win for “Black Parade” with lyrics about Black pride would be ideal in a year like this to recognize diversity and the fight for equality that’s been a dominant theme over the past year.

Besides Beyoncé, Billie Eilish’s “Everything I Wanted” could be a shocker given the industry’s love for Eilish (she swept the Grammys last year). Finally, for Song of the Year, it wouldn’t surprise me to see H.E.R. pull off an upset for “I Can’t Breathe,” a Black Lives Matter protest song that could resonate just like “Black Parade.”

This category looks like a close race between Taylor Swift and Bon Iver’s “exile” and Lady Gaga and Ariana Grande’s “Rain On Me.” However, an upset could come from Justin Bieber and Quavo’s “Intentions.” The song was a bigger hit than both, ranking 17th on Billboard’s year-end Hot 100 (compared to “Rain on Me” at number-48 and “Exile” which didn’t make that chart). And Bieber over-performed on nominations day, receiving four bids including Best Pop Album for “Changes.” Not only that, but the combination of Bieber and hip-hop star Quavo may appeal to rap and R&B voters as well as pop.

While it’s number-four in the odds as of this writing, we shouldn’t underestimate Tame Impala’s “Lost in Yesterday.” It’s the biggest hit here, which could push it to a surprise win in this category. Tame Impala have also built a strong following over the years.

SEEGrammys 2021: Billie Eilish could pull off this rare feat only ever accomplished by Roberta Flack and U2

Most users agree that Megan Thee Stallion and Beyonce’s “Savage” is the clear favorite for a win here. However, do not underestimate Pop Smoke’s “Dior” as a surprise to honor the late rapper who was murdered last February at age 20. “Dior” was also a hit, although not Pop’s biggest, and would be the second consecutive posthumous win after last year’s Nipsey Hussle victory for “Racks in the Middle.”

Given the amount of love he might get from fellow musicians, being the only one nominated, it wouldn’t shock me to see Flea pull a surprise win in this category against a field of non-musicians including trivia champion Ken Jennings (“Alex Trebek: The Answer Is”), actress Meryl Streep (“Charlotte’s Web”), and journalists Ronan Farrow (“Catch and Kill”) and Rachel Maddow (“Blowout”). Flea would be the first musician to win in a while, the last being Janis Ian in 2013, but he stands out among these nominees.