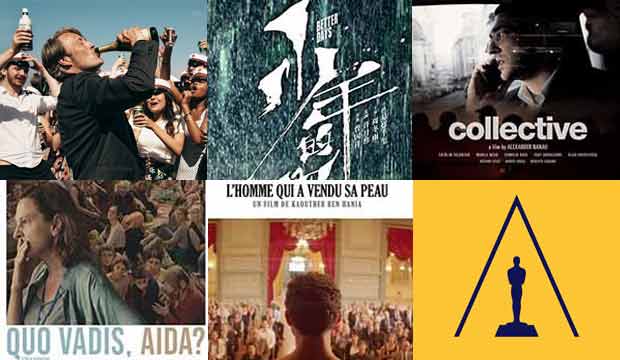 Each of the five nominees for Best International Feature Film tackles heavy-hitting real-world issues — alcoholism, bullying, asylum-seeking emigration, government corruption, genocide — but showcases them in exceptional and entertaining ways. This diverse group hailing from Bosnia and Herzegovina, Denmark, Hong Kong, Romania, and Tunisia challenges the status quo with these captivating stories that are sure to leave a lasting impact.

The crowd-pleasing frontrunner of the set is “Another Round,” which leads in critics guild wins and marks Denmark’s 13th Academy Award nominee. Its premise, a group of middle aged teachers tests the theory that maintaining a 0.05% BAC enhances one’s life, seems the least harrowing among its competition of heavier real-world issues. “The Hunt,” Thomas Vinterberg’s previous film nominated for Best Foreign Language Film in 2013, is another thrilling Mads Mikkelsen showcase with some of the same supporting cast. Vinterberg’s directing nomination is not only a big indicator for the film’s widespread love, but also of the academy’s push to diversify membership internationally. Likewise, it will definitely help, if not secure, the film’s chances at winning the Oscar.

This year marks Romania and Tunisia’s first nominations from 36 and 7 previous submissions respectively. In investigating the deadly fire that took place in the namesake nightclub, “Collective” evolves into the discovery of deep-rooted healthcare fraud tied to the Romanian government. Playing like a heightened version of Best Picture winner “Spotlight” occurring in real time with documentary footage, the film was also nominated for Best Documentary Feature.

Tunisia’s “The Man Who Sold His Skin” finds a Syrian refugee desperate to get his girlfriend back but ends up getting more than he bargained for when he outsources his body as an artist’s canvas. Kaouther Ben Hania, the film’s director, was inspired by the real-life Belgian artist Wim Delvoye, whose living work Tim is still being exhibited and live-streamed today.

Historical events make for another eye-opening and devastating contender in “Quo Vadis, Aida?” This entry from Bosnia and Herzegovina recalls the horrific genocide of 8,372 people during the Bosnian War when Serbs took control of Srebrenica. Jasna Đuričić delivers an indelible and gut-wrenching performance as a distraught UN translator, protecting herself by doing her job while fighting to save her family. Nominations for director Jasmila Žbanić and Tunisia’s Ben Hania mark only the fifth time two women have been nominated in this category in the same year. Twenty-seven women have now been nominated but only three have ever won: Marleen Gorris for 1995’s “Antonia’s Line,” Caroline Link for 2002’s “Nowhere In Africa,” and Susanne Bier for 2010’s “In A Better World.”

Hong Kong’s third ever nomination, “Better Days,” is adapted from a YA novel and brings awareness to the trauma of being bullied and anxiety-induced drive for academic perfection. After one girl commits suicide at her school, Chen Nian becomes the next victim of aggressive bullying while rigorously studying for her college entrance exam. She forms an unexpected relationship with hoodlum Xiao Bei, who ends up protecting her until the police find bully Wei Lei murdered and the pair become suspects in the investigation.

All films except “The Man Who Sold His Skin” are available to rent on-demand or on certain streaming platforms: “Another Round” and “Collective” are on Hulu, “Better Days” is free on Hoopla, and “Quo Vadis, Aida?” is playing in select theaters.