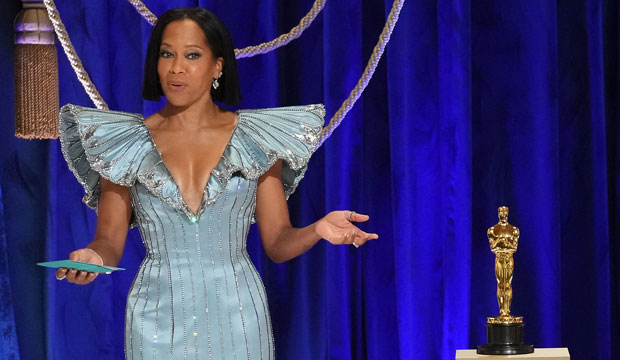 It was not a normal year for movies, or for anyone for that matter. So it should have been no surprise that this year’s Oscar ceremony would be a departure from the norm. But whatever may have necessitated the change, the result was the Oscars at their best. It’s only a shame that it took a worldwide pandemic to inadvertently give us one of the best Academy Awards ceremonies in recent memory. Check out the complete list of winners here.

It opened with Regina King — Oscar in hand — strutting her way through Los Angeles Union Station as the credits rolled, reminiscent of a classic movie opening sequence. As the first presenter of the evening, King was also the perfect person to welcome the viewing audience. Not only did she bring the glamor and attitude, but she also brought a sense of humor that balanced the often dark realities of the last year’s events with hope.

King was also the first of many presenters and winners to provide commentary on the political realities of the day, referencing the Derek Chauvin trial and flying in the face of the repeated criticism of Hollywood figures commenting on political and social issues. So those hoping for a politics-free Oscars were sure to be disappointed, although they probably would not have been watching anyway given the nature of the films nominated — “Don’t you bring politics into … ‘Judas and the Black Messiah’?”

However, the evening wasn’t bogged down by politics. The ceremony as a whole maintained an upbeat tone, and it was clear that the venue had a lot to do with that. Outside of the ceremony’s usual home at the Dolby Theater, there was marked decrease in the sparkle factor, a reduction in the glitz that has always been synonymous with the Oscars. The design of Union Station was intimate and industrial, glamorous yet simple. As a result, the ceremony felt more grounded and emotional.

The camerawork also contributed to the overall feel, no doubt thanks to the influence of Oscar-winning director Steven Soderbergh, one of the show’s producers. Presenters were often stationed among the audience, and the camera angles were not typical of a traditional ceremony.

Producers also made the unusual decision to allow the winners more time with their acceptance speeches. For once we weren’t subjected to the gradual intrusion of some form of play-off music. One can only hope that the decision to move the Best Original Song performances to the pre-show will continue beyond this year’s ceremony so that winners don’t feel the need to rush through their speeches ever again.

Those longer speeches added to the emotion of the evening. Accepting the Oscar for Best International Feature, Thomas Vinterberg (“Another Round”) teared up as he dedicated his Oscar to the memory of his late daughter, killed in a car accident just prior to the production of the film. Mia Neal and Jamika Wilson (“Ma Rainey’s Black Bottom”) became the first women of color to win in that category, with Neal calling for a day when such accomplishments won’t be considered groundbreaking.

Tyler Perry, a recipient of the Jean Hersholt Humanitarian Award, gave the evening’s most powerful speech, calling for the refusal of hate. “It is my hope that all of us would teach our kids to refuse hate,” Perry said. “Anyone who wants to meet me in the middle, to refuse hate, to refuse blanket judgement, and to lift someone’s feet off the ground, [this award] is for you too.”

And of course, there was Best Supporting Actress winner Yuh-Jung Youn (“Minari”) who continued to charm and enchant with every acceptance speech to the very end. Whether fawning over presenter Brad Pitt or paying tribute to her fellow nominees, Youn might have been the star of the evening.

Of course, the Oscars haven’t learned every lesson they need to learn. Eventually, someone should force producers to realize the terrible optics of presenters giving awards to their own films. Does anyone doubt the level of awkwardness that would have ensued if Best Actor nominee Riz Ahmed had announced a winner for Best Sound that wasn’t “Sound of Metal”?

It also would have been nice to see clips of all of the nominated films and performances. It’s still baffling why producers choose to feature clips for certain categories instead of others. And the sudden and unnecessary “Oscar Song Trivia” segment hosted by Lil Rel Howery was over saved by Glenn Close getting up and dancing to “Da Butt.” There’s a sentence I never thought I’d write.

It’s also baffling that Best Picture was given out before either of the lead-acting categories. Unfortunately, that meant ending the ceremony on an anticlimactic note. Yes, it was a shocker that Anthony Hopkins (“The Father”) won Best Actor over the late Chadwick Boseman (“Ma Rainey’s Black Bottom”), but since Hopkins wasn’t there to accept the award and he didn’t even accept via satellite, it closed the evening on a rather dull note. Which is unfair for a ceremony that, up until that point, was one for the history books.