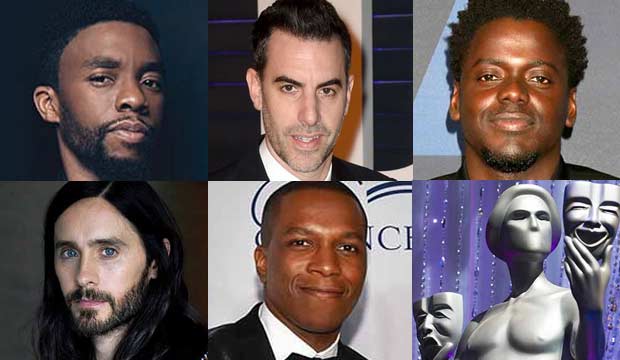 The SAG Awards have previewed eight of the last 10 Supporting Actor Oscar winners. And since the guild started giving out prizes in 1995, it has foreseen 65% of the eventual Oscar champs in this category. The nominees are often just as similarly aligned.

Leto is the only one in the lineup to have previously won an individual SAG Award. His work in “Dallas Buyers Club” brought him a Best Supporting Actor trophy in 2014; he went on to win the Oscar too. Two years ago, Boseman and Kaluuya shared in the Best Ensemble award with the rest of the “Black Panther” cast. This year, Baron Cohen, Boseman, and Odom all face each other in the ensemble category as well as individually.

Boseman is also up for Best Actor and Best Ensemble for his performance in “Ma Rainey’s Black Bottom,” making him the first person to receive four film acting bids in a single year. The late actor is also the third posthumous contender in the history of the supporting male category, following 2009 winner Heath Ledger (“The Dark Knight”) and 2014 nominee James Gandolfini (“Enough Said”).

This year marks the first time that three people of color (Boseman, Kaluuya, and Odom) have competed against each other for this award. Any one of them would be the sixth POC to triumph here, the most recent of whom was Mahershala Ali (“Green Book,” 2019). At 32, Kaluuya would also be the third youngest Best Supporting Actor winner, after Ledger, who was 28 at the time of his death in 2008, and 29-year-old Cuba Gooding Jr. (“Jerry Maguire,” 1997).

This is one of the most youthful supporting male groups ever nominated, with Baron Cohen (49) being the oldest of the bunch. Only four other sets of Best Supporting Actor nominees have included no men over 50, including those recognized in 1996, 1997, 2006, and 2009. Robert Downey Jr., who was 43 when he was recognized for “Tropic Thunder” in 2009, holds the record for youngest supporting actor to be the oldest in his lineup.

The most recent Best Supporting Actor champs are Brad Pitt (“Once Upon a Time in Hollywood,” 2020), Ali (“Green Book,” 2019 and “Moonlight,” 2017), and Sam Rockwell (“Three Billboards Outside Ebbing, Missouri,” 2018). This year’s winner will be revealed during the 27th SAG awards ceremony, airing April 4 on TBS and TNT.