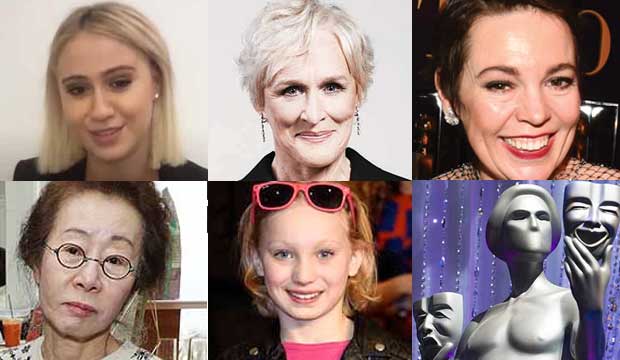 The SAG Awards have previewed nine of the last 10 Supporting Actress Oscar winners. And since the guild started giving out prizes in 1995, it has foreseen 69% of the eventual Oscar champs in this category. The nominees are often just as similarly aligned.

Close and Colman are the only previous SAG nominees. The two of them vied for the Best Actress award in 2019, with Close (“The Wife”) emerging victorious over Colman (“The Favourite”). Colman is a triple nominee this year, having also earned individual and ensemble bids for her work on the season 4 of the drama series “The Crown.” She shared in the Best TV Drama Ensemble win for season 3 of the show last year.

The 2021 Best Supporting Actress lineup is the first in six years to be entirely made up of first-time contenders in the category. Youn is the only of the five who is also up for this year’s Best Ensemble prize. At 73, she is the second oldest actress to compete in both categories for the same film after 78-year-old Maggie Smith (“The Best Exotic Marigold Hotel”) did so in 2013.

At age 12, Zengel has a shot at becoming the youngest winner in the history of the category. The record is currently held by Kate Winslet, who was 20 when she won for “Sense and Sensibility” in 1996. Zengel is the fifth child to vie for this award after Dakota Fanning (“I Am Sam,” 2002), Keisha Castle-Hughes (“Whale Rider,” 2004), Abigail Breslin (“Little Miss Sunshine,” 2007), and Hailee Steinfeld (“True Grit,” 2011). Bakalova, 24, would be the third youngest supporting female champion, after Winslet and Angelina Jolie (24, “Girl, Interrupted,” 2000).