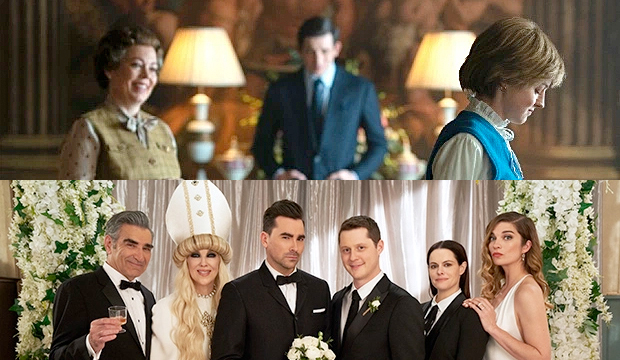 Just as Gold Derby predicted, the big TV winners of the 2021 SAG Awards were Netflix’s “The Crown” and Pop TV’s “Schitt’s Creek.” The 27th edition of these kudos aired Sunday night on TNT/TBS in a virtual ceremony that was pre-taped due to the Covid-19 pandemic. See the complete list of SAG winners in film and television.

Season 4 of the regal drama scored trophies for ensemble cast and female actor (Gillian Anderson). This is the current cast’s final hurrah at the Screen Actors Guild, as they’ll all be replaced by veteran faces when the show eventually returns for Seasons 5 and 6. “The Crown” ensemble claimed victory over those cast members from “Ozark,” “Bridgerton,” “Lovecraft Country” and “Better Call Saul.” Anderson beat out co-stars Emma Corrin and Olivia Colman, plus “Ozark” actresses Laura Linney and Julia Garner.

There was an upset in the drama male actor category, as Jason Bateman (“Ozark”) took down front-runner Josh O’Connor (“The Crown”) plus Rege-Jean Page (“Bridgerton”), Bob Odenkirk (“Better Call Saul”) and Sterling K. Brown (“This Is Us”).

As for the movie/mini acting races, Anya Taylor-Joy (“The Queen’s Gambit”) prevailed over Michaela Coel (“I May Destroy You”), Cate Blanchett (“Mrs. America”), Nicole Kidman (“The Undoing”) and Kerry Washington (“Little Fires Everywhere”), while Mark Ruffalo (“I Know This Much Is True”) grabbed the statuette instead of Hugh Grant (“The Undoing”), Ethan Hawke (“The Good Lord Bird”), Daveed Diggs (“Hamilton”) and Bill Camp (“The Queen’s Gambit”).

SEE How to make predictions at Gold Derby, explained

An additional trophy was handed out to the best stunt team on television, with “The Mandalorian” triumphing over “The Boys,” “Cobra Kai,” “Lovecraft Country” and “Westworld.”

If many of these wins sound familiar, that’s because some of these folks recently claimed awards at the Golden Globes and/or the Critics Choice Awards. Looking forward to the Emmy Awards, “The Crown,” “Ted Lasso” and “The Queen’s Gambit” now appear to be the default front-runners in their various categories; “Schitt’s Creek” is not eligible as it contended at last year’s Emmys.