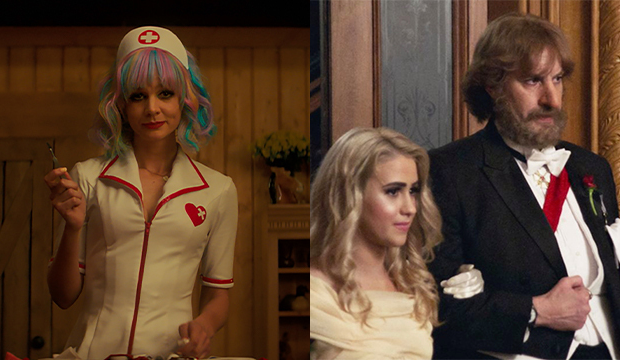 The 73rd Writers Guild of America Awards took place on Sunday (March 21) in simultaneous non-televised ceremonies held in Los Angeles and New York. The WGA was the first of the guilds to be heard from in this extra-long Oscar season. But don’t look to these results for any clarity on the screenplay races at the Academy Awards.

The stringent rules of the WGA prohibit non-guild members from competing. This year, three of the 10 scripts nominated by the writers branch of the academy were deemed ineligible here: the adapted screenplays of “The Father” and “Nomadland” (which we predict will win the Oscar) and the original screenplay for “Minari.”

The guild did align with the academy three-for-five in Best Adapted Screenplay, with “Borat Subsequent Moviefilm,” “One Night in Miami” and “The White Tiger” competing at both. “Ma Rainey’s Black Bottom” and “News of the World” round out the guild nominees. Our odds give the edge to “One Night in Miami” at the WGA Awards.

On the original side, the WGA and the Oscars matched up four-for-five including our predicted winner at both awards, “Promising Young Woman.” The other double dippers are “Judas and the Black Messiah,” “Sound of Metal” and “The Trial of the Chicago 7.” The fifth WGA contender is “Palm Springs.”

On the TV side, the drama contenders are “Better Call Saul,” “The Boys,” “The Crown,” “The Mandalorian” and “Ozark,” while the comedy nominees are “Curb Your Enthusiasm,” “The Great,” “PEN15,” “Ted Lasso” and “What We Do in the Shadows.”

Both “The Great” and “Ted Lasso” compete in the new series category alongside the comedies “Dave” and “The Flight Attendant” as well as the sci-fi/fantasy drama “Lovecraft Country.”

Below, check out our minute-by-minute report on this year’s WGA Awards winners list. (All times PT.)

4:05pm: The virtual ceremony hosted by Kal Penn has kicked off after a montage featuring WGA members recalling what profession they wanted to get into when they were children. Let’s just say all of these writers made the right career decision.

4:25pm: Next up are the Best Original and Adapted Short Form category, with Quibi Emmy-winner “#FREERAYSHAWN” triumphing for Marc Maurino. “The Store That Called the Cops on George Floyd” wins for Best Digital News.

4:30pm: “The Queen’s Gambit” continues its winning streak with a victory in Best Adapted Long Form for Scott Frank and Allan Scott, perhaps setting it on the path towards an Emmy victory. In Best Original Long Form, the winner is one of last year’s Emmy contenders, “Mrs. America.”

4:35pm: In the Best Children’s Episodic, Long Form or Special category, the winner is “The Sleepover.” For Best Animation, “BoJack Horseman” beat out “Bob’s Burgers” and four episodes of “The Simpsons” to triumph. This is actually the Netflix series’s third victory in this category, having previously won in 2017 and 2018.

4:46pm: The News Writing categories honor “Anger in America” and “Juneteenth: A Celebration of Overcoming.”

4:55pm: “Days of Our Lives” wins for Best Daytime Series.

4:57pm: “Ted Lasso” continues its winning streak with a victory in Best New Series. Combined with its recent victories at the Golden Globes and Critics Choice, this could point the way towards a very good Emmy season for the freshman Apple TV+ sports comedy.

5:00pm: “Get Out the Vote – Check Out Those Moves” wins for Best On Air Promotion, proving that the 2020 election continues to be popular with voters.

5:07pm: The Radio/Audio News Script categories honor “Changemakers: Leaders Who Make a Difference” and “Against Those Thugs: Dolores Tucker and Bill Bennett.”

5:10pm: Question: What is the winner for Best Quiz and Audience Participation? Answer: “The Weakest Link.”

5:13pm: “Desus and Mero” upsets “Last Week Tonight’s” five year winning streak in Best Comedy/Variety Talk Series. Is this a sign of things to come at the Emmys?

5:18pm: “The Crown” continues its winning streak with a victory in Best Drama Series, won by creator Peter Morgan and writer Jonathan Wilson. With its recent victories at the Golden Globes and Critics Choice Awards, things are looking good for the Netflix royal drama to finally claim the crown at the Emmys for its fourth season.

5:21pm: And the team behind “Ted Lasso” pick up the prize for Best Comedy Series, solidifying its standing at an Emmys frontrunner. Talk about a winning goal!

5:25pm: And now we’re onto the film categories, with “The Dissident” triumphing in Best Documentary Screenplay. But don’t base your Oscar predictions on this one, considering it didn’t get nominated for Best Documentary Feature.

5:28pm: Emerald Fennell soars to the top of Oscar predictions for Best Original Screenplay with a victory in that category here for her directorial debut, “Promising Young Woman.”

5:30pm: The team behind “Borat Subsequent Moviefilm” wins the prize for Best Adapted Screenplay, but don’t change your Oscar predictions just yet: remember, frontrunner “Nomadland” was deemed ineligible to compete here by the guild. Still, if you’re looking to pick a spoiler, remember that last year both film winners at WGA (“JoJo Rabbit” in adapted, “Parasite” in original) went on to triumph at the Oscars.