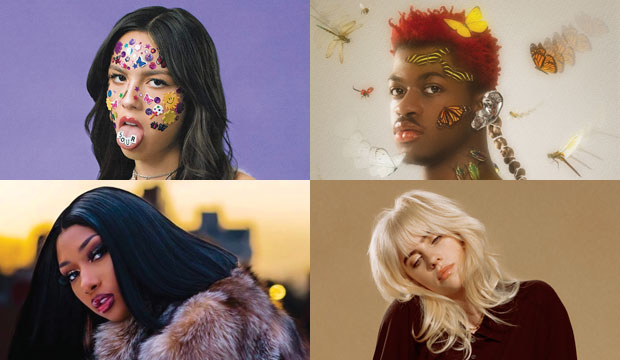 The time has come to vote for your favorite music achievements of the past year at the 2nd Annual Gold Derby Music Awards. Cast your votes now here in our predictions center (illustrated instructions are below). You can keep changing your votes as often as you like. None of your choices are final until voting closes at the end of the day on Friday, December 3.

Our awards follow the same eligibility calendar as the Grammys (September 1, 2020 through September 30, 2021). And we’ve expanded these awards from last year. The 2021 GDMAs honored musical achievements in 12 categories. This year you can vote in 23 races, including new categories where you can vote for the best albums and songs in pop, R&B, rap/hip-hop, country/Americana, and rock/alternative, not to mention a new award for Best Collaboration.

In every other category, you’ll vote for your three favorites in order of preference. Your first choice gets three points, your second gets two points, and your third gets one point. The top five point-getters in those categories will be the nominees. You may vote in as many or as few categories as you like.

Though the Grammys have made their own eligibility determinations, we’ve left that to our users to decide. Some genre-bending artists, albums, and songs are entered for consideration in multiple fields (for instance, you can find Lil Nas X in both pop and hip-hop artist categories, and we’ve included Kacey Musgraves in both pop and country). You may vote for them in the category you feel best represents their style of music, or you can vote for them in every genre where they appear. If a candidate has enough votes to be nominated in multiple genres, they will only receive the nomination in the category where they got more votes.

Taylor Swift swept our inaugural awards last year, including Artist of the Year and Album of the Year for “Folklore.” Refresh your memory on those champs here. And cast your votes right now for this year’s awards here.

1) Click “Make your predictions!” at the top right of the Gold Derby page.

3) Select a category, add your favorite candidates from the left column to the right column, and save your top choices.

Update: This article has been updated to reflect the rule about artists with multiple candidates in a single category.