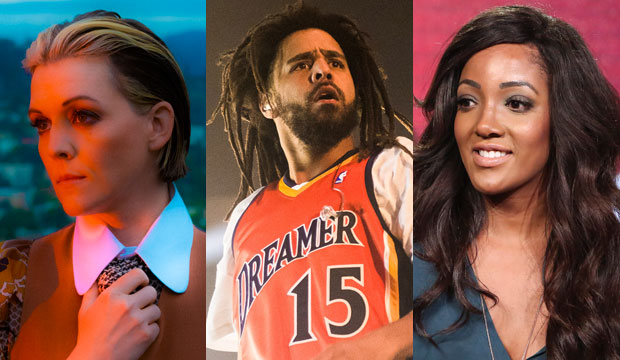 If you follow the Grammys at all, you are probably well aware that the show can be full of surprises. Take for example Dua Lipa’s “Future Nostalgia” pulling an upset against Taylor Swift’s “Folklore” for Best Pop Album this past year — despite “Folklore” going on to win Album of the Year. Or a few years back when we got that very unexpected win from Esperanza Spalding against Justin Bieber and Drake for Best New Artist. This year, with a brand new set of nominations, and a lot more competition than ever (especially in the general field categories, which were expanded from eight nominations to 10), it’s to be expected that a couple of unexpected picks will prevail. Here are three artists you might be underestimating, and why you perhaps shouldn’t.

Perhaps using the word “surprise” for this six-time Grammy winner and Americana icon is not appropriate. Carlile has been a Grammy fixture these past few years, winning her first three at the 2019 show with her general field-nominated song “The Joke” as well as its parent album “By The Way, I Forgive You” in the American Roots field. A year later Carlile won two Grammys due to her contributions to Tanya Tucker’s single “Bring My Flowers Now” and album “While I’m Livin’.” And earlier this year she took home Best Country Song yet again for “Crowded Table,” which she recorded with her supergroup The Highwomen.

This year Carlile received five nominations, including three for her song “Right on Time,” which Carlile herself described as a sequel to “The Joke.” “Right on Time’s” road to the Grammys included a controversial genre placement: the academy moved it to the pop field despite Carlile submitting it as American roots. But the placement paid off in the end, with the song getting Record and Song of the Year nominations, along with a surprise bid for Best Pop Solo Performance. With support from pop voters now, as well as her already-proven love from Americana and country voters, could Carlile perhaps add pop and general to her list of fields won?

Best Rap Album this year is full of popular and acclaimed pieces of work from five previous Grammy winners already. Four of them — Nas, Drake, Tyler the Creator, and Kanye West — have previously won that category. And then there’s J. Cole, whose album “The Off-Season” has been hailed as one of his best works.

Cole is also the only person to earn nominations all across the rap field this year, earning bids for Best Rap Performance and Best Rap Song (“My Life”) as well as Best Melodic Rap Performance (“Pride is the Devil”). This could work to his advantage, as fellow nominees Kanye, Drake, and Tyler also submitted to every category; they just didn’t get into all of them. So even though most people might default to “Donda” or “Certified Lover Boy” because of their commercial success and name recognition (plus the Album of the Year nom for “Donda”), Cole could pull a well deserved upset against the two.

When it comes to the country categories, Chris Stapleton is usually considered the favorite to win. His album “Starting Over” swept the CMAs, and won the ACM for Album of the Year as well. However, the Grammys can often be the place where passion picks arise, and there may be no more passionate pick than up-and-coming singer-songwriter Mickey Guyton. She has been making headlines for the past couple of years due to being one of the few prominent Black women in country music right now.

Considering how country music has been quite male and, especially, quite white for years, a lot of voters could see a vote for Guyton as a way to not only honor her but hopefully open the door for other women in her position. And even outside of the cultural significance of Guyton’s possible win, “Remember Her Name” also just happens to be a great album, and voters seem to agree; besides her nomination for Country Album, she also scored noms for Best Country Solo Performance and Best Country Song for the title track. Perhaps it’s time to shake things up a bit, and Guyton might be the one to do it.