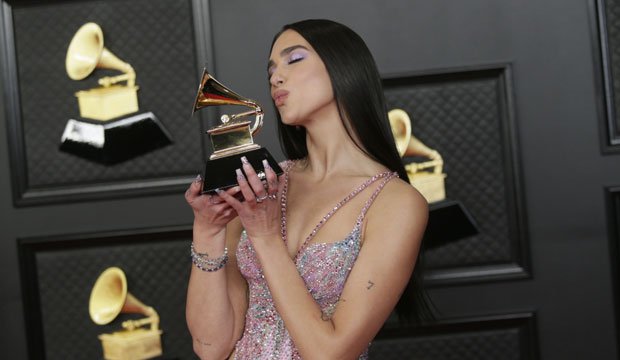 With the current Grammy eligibility period (September 2020 through August 2021) more than halfway done and the 2021 awards recently behind us, I’ve got a few things that I’d like to see for next year’s awards.

The intimate format for this year’s Grammys was really effective. It was fun to see celebs jam out to other celebs during each other’s performances, and it was especially nice to see category nominees sit closer and root for each other. Obviously the Grammys won’t keep out the public once the COVID-19 pandemic is (hopefully) under control (for monetary reasons), but maybe they could go for something closer to the Golden Globes with an audience in the back while celebrities sit and cheer together more closely in a smaller venue.

Pop songs have lyrics too…

For the millionth year in a row, we ask the Grammys for a Best Pop Song category. The old excuse used to be that most Song of the Year winners will be pop songs anyway, but that’s been changing: three out of the last five SOTY winners have not been pop songs (Bruno Mars‘s “That’s What I Like,” Childish Gambino‘s “This is America” and H.E.R.‘s “I Can’t Breathe”). Since we know voting blocs like hip-hop and R&B have a clean shot at a win in the top category while also getting their own songwriting awards, why not create a prize specifically for pop songwriters? It’s the only major genre that doesn’t have a songwriting category. Well, that and…

Alternative and rock are not the same

It’s baffling that the Grammys still lump alternative with rock in the song and performance categories. Having to watch Brittany Howard’s “Stay High” compete with Big Thief’s “Not” and those two compete with Tame Impala’s “Lost In Yesterday” makes zero sense, especially when the album categories are already divided. Furthermore, harder rock music often gets compromised in the process, with bands like The Strokes and The Killers getting zero song nominations this past year. So send songs like “Stay High” to an alternative race along with the likes of Fiona Apple‘s “Shameika,” keep recordings like “Not” and Gary Clark Jr.‘s “This Land” in rock, and for the love of everything good, send those Tame Impala and Beck songs (and albums) to pop where they belong. Creating song and performance categories specifically for alternative would just make everyone much, much happier.

SEEWill Lil Nas X return to Grammys after causing a satanic panic with ‘Montero (Call Me by Your Name)’?

Another constant petition among Grammy followers is to present more categories during the main show. Sometimes the broadcast feels more like a concert and less like an awards show, with the performers lineup reaching nearly 30 this year, even amid the pandemic. It’s fun to watch performances, and we surely are not complaining at those stellar Dua Lipa and Megan Thee Stallion/Cardi B moments, but maybe the broadcast could cut a few of the other less-stellar moments. Like, did Silk Sonic truly need two performance slots, especially when their music won’t even be eligible until next year?

Last but not least, transparency and diversity

While reforms have been attempted over the past few years, there are still changes needed in order to make the Grammys more transparent and ensure fairer representation among more genres. Nominations like Roddy Ricch‘s “The Box” in Song of the Year might not look like a big deal to outsiders, but more hip-hop songwriters making the cut like that without needing an inspirational or political hook would mean a lot in terms of equal treatment among genres. Still, with controversies like The Weeknd’s shutout and subsequent boycott, as well as complaints from other artists and Grammy insiders about sketchy practices, the 2022 Grammy nominations will surely be under the public’s watchful eye. Let’s hope that nominations reflect the best of 2020-2021 music without us having to question how or why certain artists got in, or were left out.