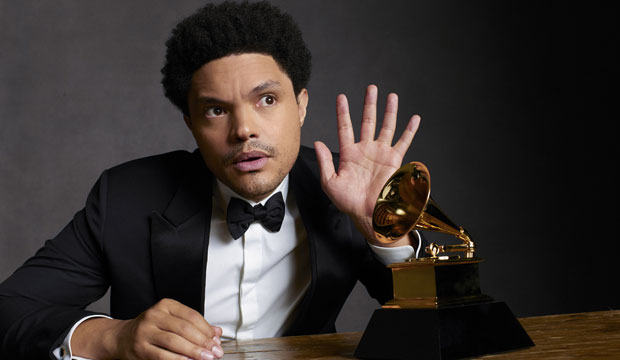 On December 1, two months before the Grammys are set to air on CBS and Paramount+ on January 31, the recording academy announced that “The Daily Show” host Trevor Noah will be returning to host the awards ceremony for the second year in a row. He hosted the March 2021 awards and had the challenge of balancing the hybrid indoor/outdoor event amid the continuing COVID-19 pandemic.

CBS president and CEO George Cheeks said in a statement, “Trevor brought his trademark talent and versatility to last March’s Grammys, and we can’t wait for him to host the event on CBS and Paramount+ again this year.” Recording academy CEO Harvey Mason Jr. added, “Trevor was amazing as our host for the 63rd Grammy Awards with praise from the music community, music fans, and critics. We’re so excited to welcome Trevor back to the Grammys stage and feel fortunate to once again have him hosting what we believe will be an unforgettable evening.”

Since taking over as host of “The Daily Show” in 2015, Noah has been nominated for 10 Emmys, winning in 2017 for the short-form spinoff “The Daily Show: Between the Scenes.” He also earned a 2021 nomination for Best Variety Special (Live) as host of the Grammys. On top of that, he himself is a Grammy-nominated recording artist. He earned a Best Comedy Album bid in 2020 for “Son of Patricia.”