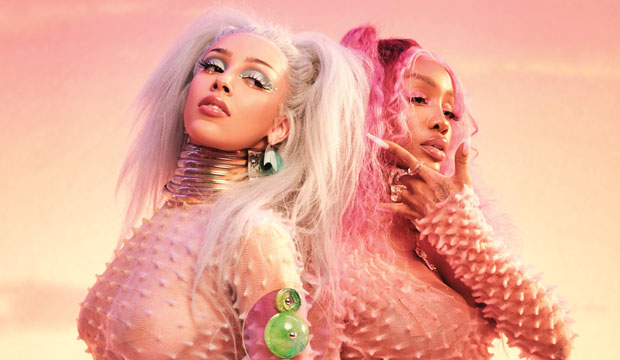 With the Grammys eligibility period nearing its September 30 deadline, let’s take a fresh look at the contenders for Best Pop Duo/Group Performance, which could be even more competitive than Best Pop Solo Performance given all the collaborations that are eligible to make the cut.

This category has numerous contenders who could easily get in. The locks — if you can call anything a lock at the Grammys — seem to be three. First, “Levitating” by Dua Lipa and DaBaby, which is the biggest hit eligible and is a remix of a song off of Lipa’s already-Grammy-winning album “Future Nostalgia“; its only problem might be DaBaby’s recent controversy concerning his homophobic remarks and stigmatizing of HIV/AIDS, which has already cost him a number of gigs but so far hasn’t knocked the remix off the charts.

Next in line are two fellow pop nominees from last year. Following his trio of pop bids at the most recent ceremony, Justin Bieber is looking at an easy nom for “Peaches,” his collaboration with Daniel Caesar and Giveon. So is Doja Cat, a solo nominee last year for “Say So” and a potential duo/group contender now with SZA for “Kiss Me More.”

The next spots are where it gets a little more complicated. BTS’ “Butter” ruled the Hot 100 for nine weeks, and they are fresh off a nomination in this category for last year’s “Dynamite.” However, there are also pop favorites Coldplay with their triple-A smash, “Higher Power.” Bad Bunny could nab a spot with “Dakiti” featuring Jhay Cortez, a crossover hit. Likewise, Glass Animals’ “Heat Waves,” which was a hit in alternative, pop, and triple-A radio, could also easily sneak in.

Of course there’s Lady Gaga and Tony Bennett‘s “I Get a Kick Out of You,” which is from their upcoming album of Cole Porter covers “Love for Sale”; they have 30 Grammys between them, so never count them out. I’d also mention The Kid LAROI and Bieber’s “Stay,” though per Grammy rules only one nomination is allowed per artist in this category, and Bieber’s “Peaches” might end up garnering more support (don’t be sad, LAROI fans, he’ll likely get into Best New Artist).

While these next artists might be long shots, they could surprise as name-check nominations due to their notoriety. Billie Eilish has so far not missed a pop nomination, so her Rosalía collaboration, “Lo Vas a Olvidar,” could get in. If somehow “Levitating” misses, Miley Cyrus and Dua Lipa’s “Prisoner” could get a nomination instead. Demi Lovato and Ariana Grande’s “Met Him Last Night” could be checked off due to voters loving the two vocal powerhouses on a song together.

Maroon 5 and Megan Thee Stallion’s “Beautiful Mistakes” is a moderate hit by two past Grammy winners, so watch out for it. And if Olivia Rodrigo really is such a strong contender, it wouldn’t be that shocking to see her Joshua Bassett collab “Even When/The Best Part” from “High School Musical: The Musical: The Series” make the cut (it would be, however, pretty funny since her breakthrough hit “Drivers License” has been speculated to be about him).

Other dark horses in this category include Shawn Mendes and Justin Bieber’s “Monster,” and Big Red Machine and Taylor Swift’s “Renegade.”