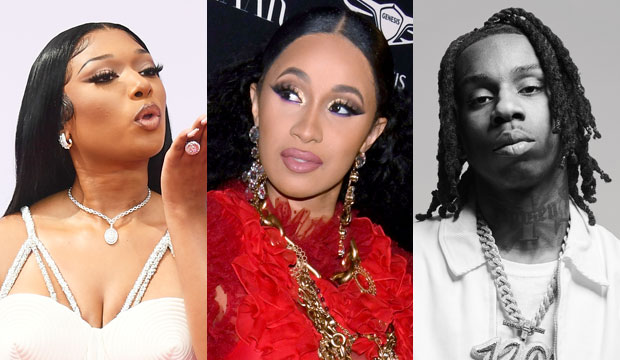 The last few months have been great for hip-hop. With multiple high-profile releases — some acclaimed, some commercially successful, and some both — and myriad buzzy new artists making big splashes in the genre, what should we expect in the rap field this year at the Grammys? Let’s consider some of the biggest contenders so far as well as a few possible hidden gems.

You can’t start a Grammys rap piece without mentioning one of the biggest hip-hop moments of the last 10 years: Cardi B and Megan Thee Stallion’s “WAP.” The song is likely the front-runner for Best Rap Performance and Best Rap Song. Add to that the overwhelming love Megan Thee Stallion just got in 2021, and how it’s still the biggest hit among eligible contenders, and you have a recipe for Grammys.

That said, “WAP” is a little old — it was eligible for the 2021 Grammys, but they decided to hold it for this cycle — so Cardi’s team might choose to submit “Up,” which is more recently and also topped the charts. But if “WAP” is entered and prevails in both categories, it’ll make Cardi a three-time winner and Megan a five-time winner, with the latter becoming the second most awarded female rapper of all time after Lauryn Hill (or the most awarded rapper if you consider Hill more of an R&B artist).

Speaking of Megan, her album “Good News” is so far also a leading contender. Besides a likely Best Rap Album nom, she could score additional bids for Best Rap Performance and Best Rap Song for her hits “Body,” “Cry Baby,” or even her new single “Thot Shit.”

Another big contender this year is J. Cole. His album “The Off Season” started at number-one on the Billboard 200 with 282,000 units and charted four songs inside the top 10 of the Hot 100. The album also received good reviews from critics, and Cole is already a Grammy winner for his 21 Savage collaboration, “A Lot.”

“The Off Season” could give Cole his first solo win, which is overdue for one of the defining rappers of the past 10 years. His single “Amari” could also be nominated in both Best Rap Performance and Best Rap Song, and his latest 21 Savage collab, “My Life,” is a likely nominee for Best Melodic Rap Performance, if submitted there to maximize nominations.

A lot of newcomers are also part of the conversation this year. Lil Durk could strike Grammy gold again with his top-five album “The Voice.” Polo G is probably in for his number-one single “Rapstar,” and the same could be said about Lil Tjay for his smash hit “Calling My Phone.” Besides those big three, we could see new names like Pooh Shiesty, Saweetie, and Rod Wave pop up. Plus we have new-ish rappers who are past nominees like the late Pop Smoke, Jack Harlow, DaBaby, and Lil Baby, who all have had hits again this year.

That said, you should never rule out the veterans in the rap field. Rap darling Jay-Z has two contenders this year: “What It Feels Like” with the late Nipsey Hussle, and “Sorry Not Sorry” alongside DJ Khaled, James Fauntleroy, and Nas. Speaking of Khaled, his album “Khaled Khaled” could also show up in Best Rap Album, and I wouldn’t be surprised to see any of its singles or tracks get a nom or two (especially one of the songs featuring H.E.R. considering her high profile with the recording academy recently).

SEE2022 Grammys Best New Artist preview: Who to look out for BESIDES likely front-runner Olivia Rodrigo

Veteran rapper DMX, who died in April at age 50, could be showered with noms and wins for his posthumous album “Exodus” to celebrate his legacy. Nicki Minaj is also a possibility with some of the songs off the re-release of her mixtape “Beam Me Up Scotty,” especially “Fractions” and “Seeing Green,” the latter featuring Drake and Lil Wayne.

Drake has two hits eligible himself, “What’s Next” and the Lil Baby collab “Wants and Needs.” Other established artists to keep an eye out for include Big Sean’s “Detroit 2,” Kid Cudi’s “Man on the Moon III,” 21 Savage and Metro Boomin’s “Savage Mode II,” and Migos’ “Culture III” (lots of sequels this year, it seems).

There are also rumors about album releases from Kendrick Lamar and the aforementioned Minaj, Cardi B and Jay-Z, so we’re excited to see what the rap field has in store for us this year and to see the best of this incredible year in hip-hop be recognized.