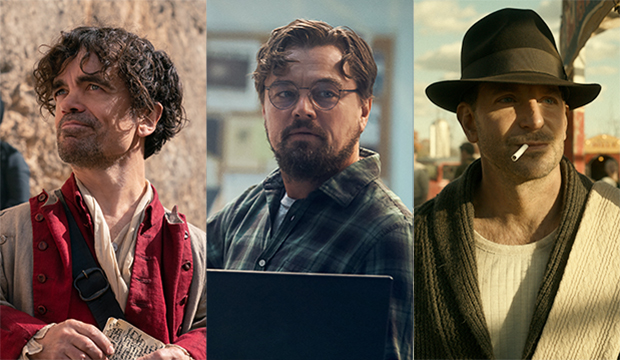 Welcome to Oscar Experts Typing, a weekly column in which Gold Derby editors and Experts Joyce Eng and Christopher Rosen discuss the Oscar race — via Slack, of course. This week, we take another look at the Best Actor race.

Christopher Rosen: Hello, Joyce! We’re back with Best Actor on the brain. Between today and Christmas, the final two top contenders for an Oscar nomination will make landfall — albeit in a pair of supremely limited releases: Peter Dinklage in “Cyrano” and Denzel Washington in “The Tragedy of Macbeth.” Those actors have been hanging around the consensus since September and join Will Smith, Benedict Cumberbatch and Andrew Garfield to make up what feels like the chalk list of Best Actor nominees. But at the risk of throwing a monkey wrench into the proceedings — and with due respect to relative underdog contenders like Leonardo DiCaprio, Joaquin Phoenix, Javier Bardem, Nicolas Cage and Jude Hill — is it possible we’ve all been focused on the wrong Bradley Cooper performance when it comes to Oscar bona fides. Out in a much wider release on Friday is “Nightmare Alley,” and while we’ve talked about how the Guillermo del Toro film should clean up in the crafts categories, I can’t help but feel like I’ve shortchanged its above-the-line chances — particularly here in Best Actor. Cooper has already gotten some of his best reviews yet for the film and his performance, as we’ve noted, ends with a bang: it would be easy to suggest Cooper has never been better than in the closing moments of “Nightmare Alley.” That work, coupled with his stellar comedic plus-sized cameo in “Licorice Pizza” suggests to me that Cooper will make a serious run at one of these five slots. (In this equation, Cooper’s “Pizza” performance is akin to “Greg sprinkles.”) But if Cooper ends up getting nominated — and I end up changing my Best Actor predictions to get him in — who will wind up snubbed? Looking at that top five, it’s hard to pick someone to leave off. I guess the smart bet would be either Dinklage or Washington, but both of them have gotten their best reviews ever as well. What do you make of this scrum, Joyce? And once you untangle that web, who do you think will come out on top?

joyceeng: Is that a Spider-Man reference? Because obviously Tom Holland will come out on top this weekend. It’s funny how everyone was predicting two acting nominations for Cooper at the beginning of the season and now there’s a pretty realistic chance he might go 0-2. He is very good in “Nightmare Alley,” but at the same time, I’m not quite sure that’s the kind of performance the academy gravitates towards. It’s a controlled and skilled turn, and yes, his best stuff is in the very last scene (if his “Licorice Pizza” cameo is Greg sprinkles, then this final moment is “Boo, souls!”). Perhaps in a weaker year he’d stand a better chance. I have not had Cooper in my five for a while and have not added him back in since seeing “Nightmare Alley” (on the contrary, I just took him out of supporting too). With Garfield coming on strong, there’s a consensus quartet of him, Smith, Cumberbatch and Washington. Denzel can make it just for being Denzel, and we all remember the “Roman J. Israel, Esq.” nom. It feels like the final spot is between Dinklage and DiCaprio, and this will be a test of Leo’s power. “Don’t Look Up” has been savaged in reviews, but I can see the industry backing the film, and DiCaprio is great in it with a meaty “Network”-esque rant. And while Dinklage does not hit a false, uh, note in “Cyrano,” are we really gonna get two musical performances in here?

Christopher Rosen: I guess the reason I’m slightly more bullish on Dinklage is that I think he’s all but assured of a Screen Actors Guild Award nomination — this despite the fact that “Cyrano” is an extremely late entry into the race and it’s hard to even gauge how many people even know it’s coming. But at Telluride, way back when, Dinklage received a big tribute. He’s worked with everyone, has a great reputation, and is already an acclaimed star and award winner thanks to “Game of Thrones.” It feels like he could get in at the SAG Awards before even accounting for the performance, which is stellar. So if he’s in at SAG and momentum starts to build (he’s already among the nominees at the Critics Choice Awards), I think Dinklage would have the inside track ahead of DiCaprio. But I remain curious to see if Washington can make it all the way through. To be clear, it seems likely: with Daniel Day-Lewis retired, I think you could make the argument Washington is the best male actor currently working and his reviews for “Macbeth” are off the charts. So if I’m going to put Cooper in, and Dinklage is in too, and Cumberbatch and Garfield feel locked, does that mean it’s between Washington and Smith? And if that’s the case, does that mean Smith — the presumed favorite — is actually an underdog?

joyceeng: I hesitate to call Dinklage a lock at SAG — sure, they nominated him for “The Station Agent” pre-“Game of Thrones,” but Leo is still the biggest movie star on the planet and holds the SAG record for most individual nominations among males on the film side. “Don’t Look Up” also hits Netflix — SAG’s favorite streaming service — on Christmas Eve so it could take off then, and SAG voting ends Jan. 9. I guess you can also wonder if three Netflix stars are gonna make the Best Actor Oscar lineup. It would be hilarious if Cooper got in at the expense of DiCaprio though since the latter was initially circling “Nightmare Alley.” I think people entertained a Washington win in the fall — including us! — but this may just be a contest between the top two of Smith and Cumberbatch. “The Power of the Dog” is clearly the strongest out of all of these guys’ films and Cumberbatch has been crushing the critics awards circuit. Smith can absolutely turn the tide at the televised awards — I don’t think anyone expected him to dominate the critics awards, but I also don’t think anyone expected him underperform as he has either. There’s also the X factor of Garfield, whose Tick, Tick… Boom!” performance seemingly has more passion than that of all of the other contenders. You can even argue that maybe he has monopolized the inspirational, feel-good corner that Smith’s “King Richard” turn is going after. Garfield’s also now in third place in the odds. I’m not going to go as far to say he’ll win the Oscar yet, but I can see him winning over a populist group like SAG-AFTRA. Am I onto something or should I come to my senses?

SEE Oscar Experts Typing: Is ‘The Power of the Dog’ still the Best Picture top dog? Or is ‘West Side Story’ coming?

Christopher Rosen: Joyce, if you’re looking for me to stop the clock or take time out, you’ve come to the wrong place. I’m basically two weeks or less away from pushing Garfield into the top of my Oscar predictions. I really think he can win the whole thing! When was the last time there was this much passion for an actor and a performance in this category? Seriously, I’m asking. Maybe Matthew McConaughey for “Dallas Buyers Club”? Maybe? I don’t even know. Sure, this could be anecdotal. Perhaps my highly curated Twitter feed and conversation group is not really indicative of broad Oscar support for Garfield as a potential winner. But when I see “Tick, Tick… Boom!” getting legitimate Best Picture buzz basically on the back of enthusiasm for Garfield, I have to wonder if he’ll just waltz to a victory. In fact, what if the comp here is the 2014 race, when both Cooper and Cumberbatch were nominated, Michael Keaton stood for months as the seeming veteran favorite who was going to win a long-deserved Oscar, and Eddie Redmayne upstarted his way to victory?

joyceeng: If you’re suggesting that Keaton should have an Oscar by now, I wholeheartedly concur (tell Leo). Stephen Hawking is as baity a role as you can get, so ultimately Redmayne’s victory isn’t that shocking. He turned the tables on Keaton at the SAG Awards, so maybe Garfield can start his late surge there too. Jonathan Larson’s plight in the musical — an ambitious creative struggling to keep at it — is also highly relatable to the those in the industry, and the fact that we all know he tragically, cruelly ran out of time and never tasted his success adds an extra layer of poignancy. There could also be some other external factors at play in both Garfield’s and Cumberbatch’s campaigns, but perhaps that’s a web to weave another day.