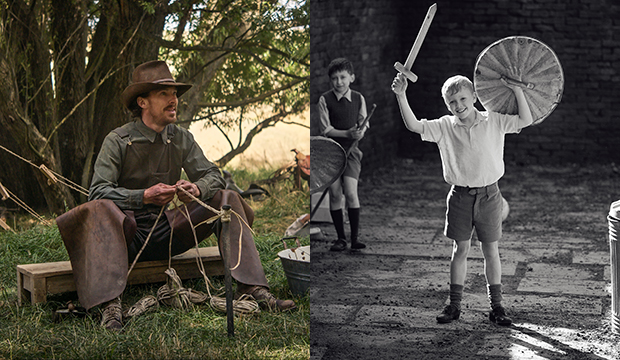 Welcome to Oscar Experts Typing, a weekly column in which Gold Derby editors and Experts Joyce Eng and Christopher Rosen discuss the Oscar race — via Slack, of course. This week, we take a look at the top category, Best Picture.

Christopher Rosen: Hello, Joyce! Don’t look up, but it’s time for us to talk about the Best Picture race. In the last seven days, festival favorite “Belfast” made its debut, Netflix released Jane Campion‘s frontrunner “The Power of the Dog” in select theaters before it starts streaming on December 1, and “King Richard” is out right now in theaters and available on HBO Max. All that plus the first industry screenings for “Don’t Look Up” and continued strong response to “Being the Ricardos.” And then next week, the debuts of “Licorice Pizza” and “House of Gucci.” C’mon, Hollywood (not to be confused with “C’mon C’mon,” also out in limited release right now), can’t we spread this out? Since they can’t, let’s talk about it: excluding the late-breaking contenders, this race has been about three films for months. There’s “Belfast,” the Toronto International Film Festival Audience Award winner, which stormed Telluride and had Sid Ganis saying it was one of the best movies he’s ever seen. There’s “The Power of the Dog,” which — full disclosure — we both have at the top of our predictions. There’s “King Richard,” perhaps the mainstream audience favorite that would follow in the footsteps of another Warner Bros. crowd-pleaser, “Argo,” en route to Best Picture. We touched on this briefly this week already, but I’m starting to think “The Power of the Dog” is a consensus pick in a preferential ballot. It’s undeniably good — it feels like opinions on Campion’s drama stretch from “simply good” to “outright masterpiece” — and has the best chance at winning multiple top-line categories of the aforementioned list: Campion is a favorite in Best Director and Best Adapted Screenplay and Kirsten Dunst is the top pick in Best Supporting Actress. So, that’s my case for “The Power of the Dog,” but what do you think about this one? And will “Belfast” or “King Richard” or something else entirely end up the obvious pick in a few months?

joyceeng: “The Power of the Dog” does feel very shrimpy, doesn’t it? I agree with everything you’ve said about it and that’s partially why I have it in first as well. It’s a prestige pic that can be both respected and loved, rather than just the former, which is what’s sunk some high-profile and coincidentally other Netflix contenders like “Mank” and “The Irishman” in the past. There’s also an element to the film that if you don’t know anything about the movie or book going in, I’ve found, has taken people by surprise and they have a certain appreciation for it, to sound completely vague. It’s definitely not a crowd-pleaser by any means, but like I said last week, “Nomadland” wasn’t a crowd-pleaser either and it swept everything while everyone spent the elongated season trying to come up with a “crowd-pleasing” alternative, like “The Trial of the Chicago 7,” which was just fetch. “King Richard” is a crowd-pleaser, but, again, like I said last week, I don’t really think “Belfast” is one, even though that’s the narrative that’s emerged since Telluride. There are charming and cute moments for sure, and I get why some people are enamored with it, but it’s not a crowd-pleaser the way “King Richard” is. I didn’t think it hit the emotional highs that you’d think it would go to in certain scenes and it kind of keeps you at a distance (part of this you could attribute to it being from the perspective of a child), but of course, that does not mean it can’t win. It has more No. 1 picks overall than “The Power of the Dog.” What do you think? Will the Oscar go back to Ireland? Before you answer that, I’ll just add that my top three are “The Power of the Dog,” “Belfast” and “Licorice Pizza,” which is in sixth place but on the rise following a large slice of enthusiastic reviews.

Christopher Rosen: I love that you’re bullish on “Licorice Pizza” which is my favorite movie other than “CODA” to come out this year so far. (Pause here to manifest Best Picture buzz for “CODA.”) As for the other two contenders right now: “Belfast” has the look of a Best Picture favorite — the festival buzz, the audience awards, the acclaimed cast, and even fancy black-and-white photography so you know it’s serious business — but I’m not sure it can compete as a crowd-pleasing alternative to “The Power of the Dog” when “King Richard” is right there. People are going to love “King Richard.” It’s so watchable, a throwback to the kind of ’90s movie star movies we think they don’t make any more, a four-quadrant family film that should generate a lot of views for HBO Max over Thanksgiving weekend (and perhaps in theaters too, although who knows). It’s a movie people will tell their parents and nephews and nieces to watch. It’s a safe pick that doesn’t require much explanation and certainly could jump to the top of the screeners pile simply because it rules. I’ll be honest, I have toyed with putting “King Richard” first in my predictions. It feels like a surefire SAG ensemble nominee and a PGA pick as well. There’s even a world where Reinaldo Marcus Green, who should rightfully be in more of the Best Director conversations, gets in at the DGA Awards. Couple that with what should be two acting nominations for Will Smith and Aunjanue Ellis, and perhaps noms in Best Original Screenplay, Best Hair and Makeup, and maybe even Best Cinematography as well (“King Richard” was shot by Oscar winner Robert Elswit), and it does feel like the kind of mainstream movie that gets embraced by the academy. “Belfast,” by comparison, is kind of a tweener maybe: it’s neither the massive work of an auteur like “The Power of the Dog” nor a mainstream success like “King Richard.” But maybe I’m wrong about all of these and there’s a lurker in the midst coming soon. This is where I’m teeing you up to type about “Don’t Look Up” (which we’ll hopefully see next week), but feel free to also go rogue!

joyceeng: I am cautiously optimistic about “King Richard” because while it’s a crowd-pleaser (how many times are we gonna say “crowd-pleaser” today?), I’m not quite sure if it has the right amount of highbrow appeal. I’m not trying to sound like a snob here — you know I love me some tennis and it would tickle me to see a tennis movie serve a winning ace — but that’s just my read of the continually changing makeup of the academy. Something like “Licorice Pizza” is warm and crowd-pleasing (dammit) with highbrow flavor, thanks to Paul Thomas Anderson, and — I haven’t checked any scores — but it’s probably the most critically raved contender not named “The Power of the Dog.” Perhaps the only thing it’s lacking is an “important” story. “Don’t Look Up” has that as a satire on political indifference and incompetence, and the good thing for it is that the reception has been less divisive than that of “Vice,” which still nabbed eight nominations. I’ve always had “Don’t Look Up” in and now I think it’s safely in. Can it win? I’ll reserve judgment ‘til I see it. But let’s talk about your real favorite movie of the year: “House of Gucci.” I currently have it in the precarious 10th spot and I’m guessing that you have it in higher. Will it really be a Best Picture nominee, sweetie?

Christopher Rosen: Do we get paid per crowd-pleaser? If so, ka-ching! But seriously, I’m more certain of that “House of Gucci” Best Picture nomination than ever. Like I mentioned this week, it’s just so much fun to talk about, think about, meme about. It’s a perfect blend that seemingly hits both factions of the academy: the new, cool members who are Very Online and the veteran Old Hollywood-types who love melodrama. I feel like it’s in for at least four or five nominations. But let’s end with some look-ahead speculation about “Don’t Look Up”: it’s a Big Hollywood Message Movie with the most famous people in Hollywood that speaks to the ongoing climate crisis as well as the depressing reality of the coronavirus pandemic. I know the early buzz is that it’s a comedy and that would make it seem like a long shot, but if the academy wants to reflect the moment, will that prevent them from looking down on “Don’t Look Up” for the lolz? I guess we’ll find out next week, but what do you think? (Crowd-pleaser!)

joyceeng: We really should start charging per crowd-pleaser, which is also what “Don’t Look Up” is. I don’t think they’ll look down on it because it’s not like it’s one of Adam McKay’s comedies of yesteryear — this film is from the director of “Step Brothers” and “Anchorman,” if you haven’t heard — and he’s become an Oscar favorite with his socially conscious, stylized dramedies/black comedies/satires since PGA winner “The Big Short.” That being said, “Don’t Look Up” will probably land in the bottom half of the top 10 on ballots more frequently than some of its rivals, so it’ll have more of an “Up”-hill climb. And not to bring this back to our favorite show, but McKay is an executive producer on “Succession,” the funniest drama on TV. TV is not film, and the Oscars are not the Emmys, but maybe they should be? If it is to be said.