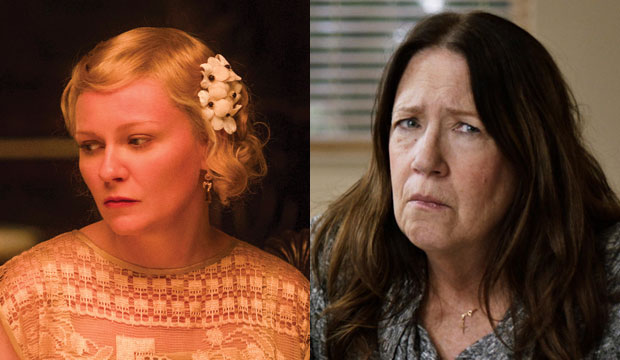 Kirsten Dunst has been racing up our Oscar odds chart since it was announced that she would be campaigned as a supporting actress for Jane Campion‘s Western “The Power of the Dog.” Now she’s closing in on front-runner Ann Dowd (“Mass”) in our odds and has actually surpassed Dowd in the rankings of the Expert journalists we’ve surveyed.

Dunst plays a woman tormented by her new husband’s brother (Benedict Cumberbatch), but this isn’t the first time she’s been on the Oscar radar. She received a Golden Globe nomination for “Interview with a Vampire” (1994) when she was a child, and her grown-up role in “Melancholia” (2011) earned her Best Actress kudos from the Cannes Film Festival and the National Society of Film Critics. So she’s due for recognition and now five Experts say she’ll win: Thelma Adams (Gold Derby), Clayton Davis (Variety), Matthew Jacobs, Tariq Khan (Fox TV), and Michael Musto (Queerty).

Six Experts are still forecasting a victory for Dowd for her role as one of four parents trying to come to terms with profound grief: Shawn Edwards (WDAF-TV Fox), Susan King (Gold Derby), Wilson Morales (Black Film and TV), Perri Nemiroff (Collider), Brian Truitt (USA Today), and Susan Wloszczyna (Gold Derby). But since more Experts are currently predicting that Dunst will be nominated, that gives her the slight edge in the Experts’ odds.

What might give Dunst the edge is the overall strength of “Power of the Dog” as an awards contender. It’s one of the top two favorites to win Best Picture (along with “Belfast”), while Jane Campion is the front-runner to win Best Director. “Mass,” meanwhile, is on the bubble for Best Picture and elsewhere is only in the top five in our odds for Best Original Screenplay.

Limited across-the-board Oscar support probably hurt other early awards season favorites like Sylvester Stallone in “Creed” (2015), Willem Dafoe in “The Florida Project” (2017) and Glenn Close in “Hillbilly Elegy” (2020), all of whom ended up losing to actors from Best Picture nominees (Mark Rylance in “Bridge of Spies,” Sam Rockwell in “Three Billboards,” and Yuh-Jung Youn in “Minari,” respectively). So Dowd’s fortunes may depend on how well “Mass” is received overall. Or she could end up like Regina King (“If Beale Street Could Talk”), who ended up winning even after her film’s shortfall in nominations.

Oscar odds for Best Supporting Actress
Who will win?