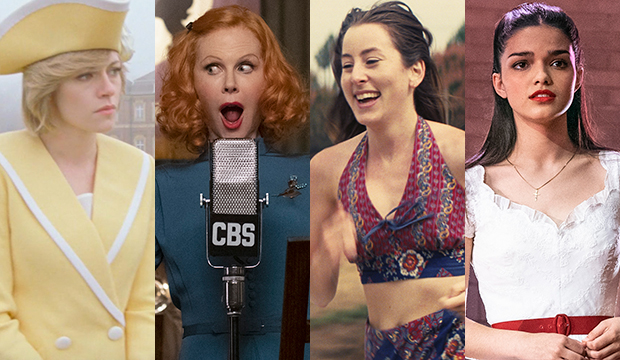 Welcome to Oscar Experts Typing, a weekly column in which Gold Derby editors and Experts Joyce Eng and Christopher Rosen discuss the Oscar race — via Slack, of course. This week, we reconvene on Best Actress, which has a few new names in the mix.

Christopher Rosen: Hello, Joyce! We’re back at it again following a full week of movie-watching (I even revisited “The Power of the Dog” last night, now on Netflix!) to discuss our favorite category: Best Actress. A lot has changed since we last commiserated on this topic, including our first major Best Actress winner of the year: On Thursday, the National Board of Review gave its Best Actress honor to none other than Rachel Zegler from “West Side Story.” I’ll admit, this delighted me: Zegler is wonderful in Steven Spielberg‘s musical, and her performance (she sings, she dances, she charms, she cries!) had at least one major awards pundit suggesting she could go all the way. I’m here for that, but it would be a surprise on multiple levels, not the least of which is that Zegler is a first-time actor and would stand as the youngest Best Actress winner ever. She’d also be the first actress to ever win an Oscar for a Spielberg movie (with Rita Moreno potentially joining her on Oscar night). But “West Side Story” is going to contend for the most nominations, so I understand the instinct to push her into the final five — so much so that I did just that immediately after the movie, only to flip-flop shortly after because I am who I am. At the moment, I still have Nicole Kidman on top for “Being the Ricardos,” another potential Best Picture force. Which brings me to my question, Joyce: Does what seems like waning support for “Spencer” as a whole ding Kristen Stewart enough to push her out of the top spot in favor of an actress in a stronger Oscars player?

joyceeng: Wow, way to ignore Ariana DeBose! Best Actress is getting kinda fun. Remember last year when everyone nailed the final five by now, give or take a Zendaya or, uh, Amy Adams? It’s the opposite this time in that it’s still pretty fluid with a bunch of names in the mix and endless permutations that make sense. I too have Kidman in first, but Stewart is arguably still the safest for the nomination merely because she’s been top of mind for so long. I wouldn’t say she’s a lock for the win, especially with so many late-breakers coming on strong whose films will be bigger players than “Spencer” will probably end up being. Just looking at the current top 10, after Stewart, you have people in similar projects, so to speak. Kidman, Jessica Chastain, Lady Gaga and Jennifer Hudson are playing real people in biopics/films based on real events. Olivia Colman, Penelope Cruz and Frances McDormand are the respected veterans in high-brow picks. And you have two people with breakout performances in their film debuts, Zegler and Alana Haim. (And yes, I know Stewart falls under the first category too.) I dropped Box Office Queen Lady Gaga yesterday to put Cruz back in, so my current five is Kidman, Stewart, Colman, Cruz and Haim. But again, you can make a list of five with any of these — and some other long shots like Tessa Thompson, Jodie Comer and Renate Reinsve — and I’d be like, yeah, OK. That’s a long way of saying I think KStew is beatable. Who will beat her though? It’s too early to say, though I guess according to us Kidmaniacs, it’s Nicole. If it’s not Nic, who else do you think can take her down?

SEE Oscar Experts predictions slugfest: How will ‘West Side Story’ and ‘Nightmare Alley’ shake things up?

Christopher Rosen: I have almost the same five as you do — whither Lady Gaga, though I imagine I’ll put her back in if she starts winning some precursor honors — but with one exception: instead of Alana Haim, so awesome in “Licorice PIzza,” I have Jessica Chastain. And honestly? I think she could even win. Here’s my case: She was a one-time serious threat way back in September when “The Eyes of Tammy Faye” was released, but recency bias and the fact that the film itself has gotten mostly average critical responses has pushed her out of mind. But there’s a reason to think she’ll rebound: “Tammy Faye” was definitely the first major screener to get out there, and people are watching it because few saw it in theaters (and screenings for it, scheduled around Telluride and Toronto, weren’t always easy to come by). This is anecdotal, but almost everyone I’ve spoken to who *has* watched it, came away thinking Chastain has never been better. They’re right, too! She’s great in the movie, and it’s the kind of full transformation that not even that tier of transformative performances can match. I can see her getting in at the Screen Actors Guild Awards and running a close second to Kidman there — and then maybe we’re off to the races. I still think we’re going to get the Kidmanaissance, but when the Chastainaissance is right there, who knows?

joyceeng: I still have Chastain getting in at SAG, but I feel like all these late-breakers hitting is bad news for contenders like her and JHud, who gave great performances but whose films came out early and didn’t really make much noise and for which they’d likely be lone nominees. If this were last year, I’d say Jess is in for sure, but it’s getting crowded now. I understand your hesitancy with Haim, whose own path is tighter with Zegler entering the chat. In the Battle of the Breakout Stars, Zegler fits the profile of a typical Best Actress nominee/winner: young triple threat with a “star is born” turn in a big, splashy studio contender. This is not to say they both can’t make it in, but Haim’s performance is very “chill vibes,” exuding a cool confidence that I never had in my 20s, that could easily be taken for granted compared to all the singing and dancing Zegler does. However, as we’ve discussed numerous times, this category has skewed older in recent years… so advantage, Kidman? After all, the word “failure” is not in her vocabulary. Let’s just pray to the Awards Gods in the meantime for split precursor winners like last year for maximum chaos.