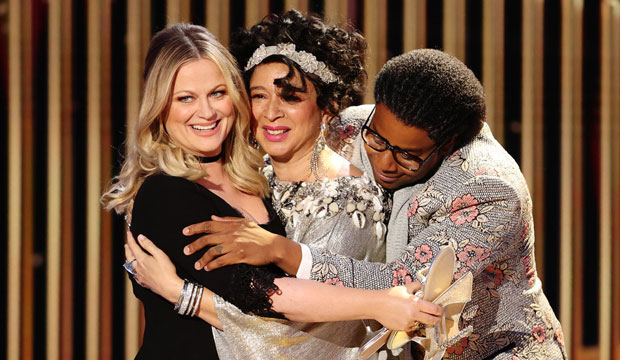 “Let’s see what those European weirdos nominated this year.” That might have been the nicest thing that hosts Tina Fey and Amy Poehler said about the Hollywood Foreign Press Association during their opening monologue at the 78th Golden Globe Awards, a show that started off awkwardly and never found its footing. Check out the complete list of Globe winners here.

Given the pandemic, there was no scenario in which there would be a normal Golden Globes ceremony. Gone was the sight of celebrities enjoying their umpteenth bottle of free champagne, a catalyst for some of the more memorable Globes moments we usually get. So Poehler and Fey had a harder task than usual, especially performing on separate coasts to a small, masked group of first responders and essential workers.

The chemistry between Fey and Poehler is everlasting, something even a continent-wide separation couldn’t diminish. And their genial, smiling demeanor did little to hide the sting from the barbs thrown at everyone from Mario Lopez to Matthew McConaughey. Fey had one of the most uproarious lines of the night targeting a couple of Netflix projects, claiming that “The Queen’s Gambit” is whatever James Corden was up to in “The Prom.”

The hosts were particularly pointed in their jabs at the HFPA, an organization that’s had its fair share of controversy in recent months. Referring to the group’s headquarters as “the back booth at a French McDonald’s,” Fey and Poehler made no bones about the HFPA’s problems with diversity, something that was also brought up by multiple presenters and nominees throughout the evening, including “This Is Us” stars Sterling K. Brown and Susan Kelechi Watson, and Best Film Comedy/Musical Actor winner Sacha Baron Cohen (“Borat Subsequent Moviefilm”).

But no matter how in sync Fey and Poehler may have been, there were certain technical choices that just didn’t work. Reaction shots of audience members is a familiar but reliable awards show trope. However, timing matters and something about the timing was just off, probably due in part to the audience beaming in via webcams. By the time the director cut to a reaction shot of Nicole Kidman, for instance, Fey and Poehler had moved on to their next joke. The result was jarring and often uncomfortable.

With all of the nominees appearing virtually, it’s no surprise that the evening included technical hiccups. Best Film Supporting Actor winner Daniel Kaluuya (“Judas and the Black Messiah“) had sound issues that almost put his entire acceptance speech in jeopardy. And someone forgot to turn on the lighting for presenter Tiffany Haddish; though it was probably a greater affront to introduce the Emmy winner just as the star of the latest “SpongeBob” film, certainly not her most noteworthy credit.

But even when the technology worked, there were moments that just didn’t. Too many times, nominees were shown watching other acceptance speeches or chatting with each other as the show went to commercial. It came off as awkward. For example, audiences were treated to the Best TV Comedy Actor nominees mocking presenter Tracy Morgan’s mispronunciation of the movie title “Soul,” while the Best TV Drama Actors smiled awkwardly while Bob Odenkirk attempted to get some conversation going. It was uncomfortable. However, those unexpected moments did give us appearances from Sarah Paulson’s dog and Best TV Drama Actress winner Emma Corrin’s cat, so I suppose we can’t complain too much.

Unfortunately, no change in technical details can solve a continuing problem of the Golden Globes: how to make the hosts’ presence felt beyond the opening monologue. Though both Fey and Poehler participated in honoring Norman Lear with the Carol Burnett Award and Jane Fonda with the Cecil B. DeMille Award, the show seemed almost hostless after the monologue.

Of course, we might have gotten more of Tina and Amy if so much time hadn’t been wasted on bits that went nowhere. I love Kenan Thompson and Maya Rudolph, but did we need an entire segment of them as second-rate, inebriated and vaguely French songwriters? And was there a need for a Golden Globes version of “Kids Say the Darndest Things”?

In what was perhaps the most misguided moment of the ceremony, the producers decided that paying tribute to the nation’s first responders meant having doctors and nurses engage in terrible movie and television-based puns with celebrities. Those thankless segments were annoying enough on their own, but it is unforgivable that so many of those segments ate into the winners’ acceptance speeches, so much so that too many winners were played off far too quickly.

Thankfully, the show was somewhat saved  by passionate and unabashedly political acceptance speeches. It was no surprise to hear activism from Fonda and Lear, both of whom have made activism a cornerstone of their work. And there were also wonderfully passionate speeches from Best TV Movie/Limited Actor winner Mark Ruffalo and Best Film Screenplay winner Aaron Sorkin.

However, it was the late Chadwick Boseman‘s win for Best Film Drama Actor for “Ma Rainey’s Black Bottom” that gave the evening one of its few truly emotional moments. Accepting for him, Boseman’s widow Taylor Simone Ledward paid tearful tribute to her late husband and his collaborators: “He would say something beautiful, something inspiring, something that would amplify that little voice inside of all of us that tells you you can.” It was a small moment of true beauty and emotion. If only the rest of the evening could have delivered the same.