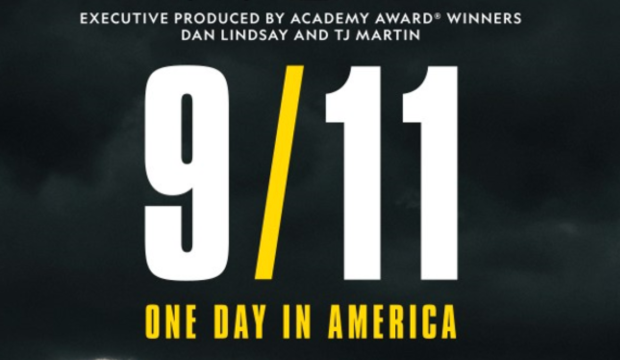 Kathy Comerford was working on the 70th floor of the South Tower of the World Trade Center on Sept 11, 2001 when United Flight 175 flew into the building at 9:03 a.m. She was literally blown out of her shoes. “I was looking for my shoes to get up, so I could get back down the stairs,” Comerford recalled. “I kept thinking this building is not going to take me. There’s no way I’m going [to die]. I’m going home to my kids. But here we are now. Our family now, our motto is, be thankful. Don’t sweat the small stuff. It’s not worth it. Embrace the fact there you are here for a reason. I was saved for a reason and many others didn’t have the same luck and fortune.”

Comerford is one of over 50 survivors and first responders featured in the powerful and emotional National Geographic documentary series, “9/11: One Day in America,” which premieres Aug. 29. Directed by Dan Bogado, the six-part, four-night limited series, produced in collaboration with the 9/11 Memorial & Museum, examines the attacks 20 years ago in New York City, Washington, D.C. and Pennsylvania. Besides the gripping and poignant first-person remembrances, the series features extraordinary archival footage-the filmmakers went through 951 hours of material for “One Day in America.”

Nat Geo recently had a virtual premiere featuring the second episode on the attack on the South Tower followed by a Zoom conversation with ABC News’ Lindsey Davis and producer T.J. Martin, series producer Caroline Marsden, Comerford and Frank Puma, who was a 21-year-old EMT for the FDNY.

“For [my creative partner] Dan Lindsay and I, the reason we got involved in this project is we wanted to humanize the individuals who survived the events and think about it a little bit more as an oral history, “ said Martin, adding “that way we declutter the events. We declutter the geopolitics of it all with intent of getting to the heart of experience and figuring out a way to create a conduit for empathy.”

Comerford has always talked about her experience that tragic day.  “I think that helped me throughout the 20 years. From the moment it happens, from the day I got home, it was a story that I felt everybody needed to hear because everybody has an opinion unless you were there in the moment. I think it’s important to understand that in this whole situation of this horror and this terror that the human kindness and the resilience and humanity that was going on is very important too.

Puma, though, never really talked. “In the last 20 years, I don’t think I’ve read a book or watched anything on TV or I’ve done anything that’s associated with the Trade Center If someone really asks me what happened to me on that day, I would give little things here and there, but never really go into detail.” It was his wife who twisted his arm when he was asked to participate in the series. “She’s like ‘You have to remember you were a part of history, whether you like it or not. You were there and your story needs to be told to people.'”The interview ended up being cathartic, explaining that he felt like a big weight had been lifted off his chest.

Comerford started to cry when she talked about her now-grown children. “When my daughter got married,  I was like, crap, I was seconds, minutes away from not being there or for First Communions or just Christmas morning. It is never wasted on me, that thought.  Just being able to sit on the couch and my 25-year-old puts her head in my lap, I’m like, I almost didn’t get to do that. So, I’m thankful every day.”

PREDICT the Emmy winners until September 19

Puma suffers from PTSD two decades later. “Like a lot of people, I still have my little ticks from it,” he explained. “Driving in a car and you hear a truck, a trailer come up next to you and they hit a pothole, you hear that big bang. My first reaction is to look up towards the sky to see what’s going on. I still have my nightmares about it. I still have my dreams about it at nighttime, especially as the days get closer and closers to that day.” He recently took his family to the National Sept. 11 Memorial and Museum. And he lost it when they went into the one room that showcases the voicemail recordings from people looking for their loved ones. “I walk into that and I’m like I can’t do this right now. I walked out and I just broke down. Everything just came over me. It’s so weird Just on a random day, you look up in the sky or you see something, you see a plume of smoke that goes by and just the feelings and the sensations just register you. It just gets you.”

Comerford has the same issues. “I’m with you Frank,” she said. “For me, if I’m at a wedding or somewhere where everybody’s dancing on the dance floor-you know how the floor feels like it’s moving or bucking- that could take me to my knees. Because when the plane hit us, the floor was rolling and buckling. That’s one sensation I can’t get past. I freeze when that happens. So, there are certain things that you wouldn’t even think about that can trigger an emotion or a sense of putting you back there, just even for a split second.”

Puma noted how crucial it is that we commemorate the 20th anniversary of 9/11. “It’s important that people remember the past because I you don’t learn from the past, you’re doomed to repeat everything. Unfortunately,  there are some bad people in this world, but fortunately, as you can see, there are a lot of good people in world. It’s amazing just to see when it seems like the whole world is falling part around you, that there are people who are going to come in and pretty much risk everything they have to help somebody else out. So, It’s a testament to show how the good nature of people will prevail over everyone.”