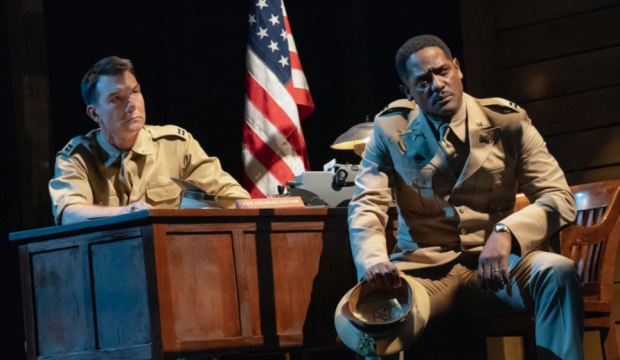 “A Soldier’s Play” won the Tony Award for Best Play Revival. And thanks to an update to the official Tony rules, playwright Charles Fuller is now a Tony winner for the same play that won him a Pulitzer Prize for Drama 39 years ago. We can thank Neil Patrick Harris for setting it in motion.

Back in 2014, “Hedwig and the Angry Inch” (starring Harris) was competing at the Tonys in the Best Musical Revival category. Except this was the first time “Hedwig” had ever played Broadway. The official Tony rules dictated that “Hedwig” had to compete as a revival because although it had never been on Broadway before, it opened Off-Broadway in 1998 and had been mounted many times all over the world since. “Hedwig” was deemed a “classic” instead of a new musical. One of its competitors that year, Jeanine Tesori’s tuner “Violet,” also wound up in Musical Revival for the same reasons.

When Neil Patrick Harris accepted his Tony Award that year for Lead Actor, he lamented that “Hedwig” authors John Cameron Mitchell and Stephen Trask were not eligible to be nominated for Best Book or Score “because of the circumstances.” Those words reignited a conversation around authors who fell into a strange grey area when it came to the Tonys. The Tony Administration Committee quickly adopted a rule change for the following season: if a play or musical had to compete as a Revival for its first Broadway run due to the “classics” rule, it’s authors would be listed as nominees along with the producers if it landed a nomination for Musical Revival or Play Revival.

Several authors have benefitted from this rule change. David Harrower earned a nomination for “Blackbird,” while Kenneth Lonergan snapped up three nominations for his plays “This is Our Youth,” “Lobby Hero,” and “The Waverly Gallery.” August Wilson and Mart Crowley won Tonys for their plays “Jitney” and “The Boys in the Band,” respectively.

Now Charles Fuller joins their ranks. “A Soldier’s Play” is his best known work. It was a success when the Negro Ensemble Company premiered it Off-Broadway in 1982. The play ran for 468 performances and its cast featured Adolph Caesar, Denzel Washington, and Samuel L. Jackson. In addition to the aforementioned Pulitzer Prize, Fuller’s play also won the Outer Critics Circle Award and the New York Drama Critics Circle Award for Best American Play.

David Alan Grier (who won his first Tony Award tonight for this play) recently announced that he would executive produce and star in a limited series adaptation of “A Soldier’s Story.” Fuller will also serve as an executive producer. He already earned an Oscar nomination in Adapted Screenplay for the big screen translation (also titled “A Soldier’s Story”), so perhaps his next awards ceremony invite will be the Emmys.