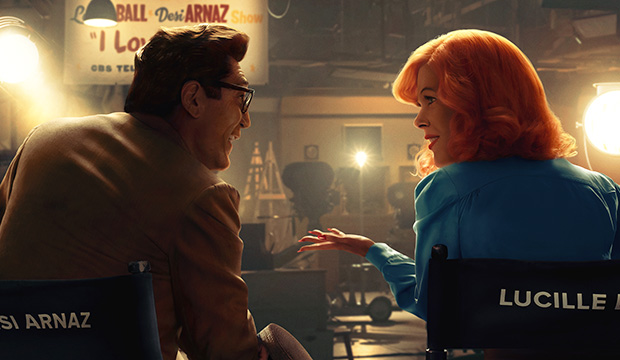 If at first you don’t succeed, try again. Just one year after failing to score an Oscar for Best Original Screenplay for penning Netflix’s “The Trial of the Chicago 7,” Aaron Sorkin is back and vying once more to become the latest screenwriter to take home both screenplay Oscars. This time, he’s eligible for writing the script for the upcoming film “Being the Ricardos.”

The movie stars Nicole Kidman and Javier Bardem as Lucille Ball and Desi Arnaz, respectively, and depicts the personal and professional relationships between the married couple and “I Love Lucy” co-stars over the course of a particularly fraught week in 1952. Early reactions to the film have been overwhelmingly positive, with many critics praising Kidman’s performance. The movie is currently sitting in sixth place in Gold Derby’s combined odds for Best Original Screenplay at 14/1, but it’s been on the rise of late, and it should continue to rise once the movie begins its limited theatrical run on Dec. 10 before arriving on Prime Video on Dec. 21.

Right now, though, Paul Thomas Anderson’s coming-of-age film “Licorice Pizza” leads the field with 4/1 odds, and seven Experts and seven Editors predicting it to triumph over the competition. Meanwhile, Kenneth Branagh’s “Belfast” sits comfortably in second at 9/2 with nine Experts and two Editors going all in on it. Rounding out the rest of the top five are the Zach Baylin-penned “King Richard” (13/2 odds), Adam McKay’s latest comedy “Don’t Look Up” (7/1) and Fran Kranz’s emotional debut film “Mass” (8/1).

Of course, Sorkin isn’t the only person who could potentially join the exclusive screenwriter club this year. Jane Campion, who wrote and directed “The Power of the Dog,” could make history as well by becoming the first woman to take home both screenplay awards. She’s in the running for the Oscar for Best Adapted Screenplay, having already won original screenplay for writing “The Piano” (1993).