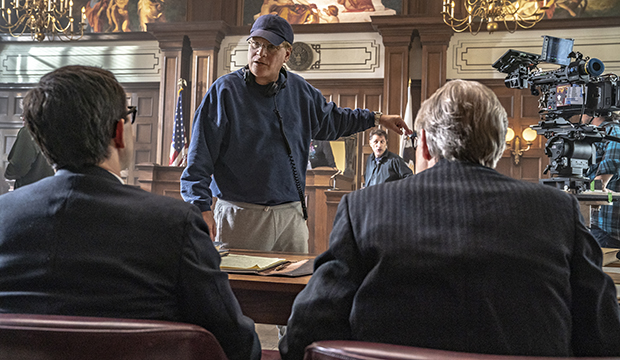 Aaron Sorkin, the writer/director of the red-hot Oscar contender “The Trial of the Chicago 7,” felt the film was “pretty relevant” during production in the winter of 2019. His acclaimed Netflix film documents the historic case against the political activists accused of inciting riots at the 1968 Chicago Democratic Convention. “We didn’t need it to get more relevant,” said Sorkin, who just won a Golden Globe for his screenplay, during a recent Variety Zoom interview with the publication’s Jazz Tangcay. Joining Sorkin were stars Sacha Baron Cohen (Abbie Hoffman) and Eddie Redmayne (Tom Hayden) plus producer Marc Platt and editor Alan Baumgarten.

But obviously, said Sorkin, the film became even more relevant “in May with the police killings of George Floyd and Brianna Taylor, protestors taking to the streets and cities all over America and in a number of those cities, those protestors being met by tear gas and riot clubs. And then on Jan. 6, Sorkin added, President Donald Trump incited the riot on the Capitol for which he was impeached by the House, which was “exactly what the Chicago 7 were on trial for doing. By the way, the very conservative jury in Chicago would have taken all of 10 minutes to find Donald Trump guilty for the simple reason that they were conservative; they weren’t demented.”

Baron Cohen noted that the film, which is nominated for Critics Choice and SAG Awards and a WGA honor for Sorkin, is also about the “potential lethal nature of lies, that lies can kill when leaders lie. We saw the attack on the Capitol [on Jan. 6] was based on a lie which was that Trump won the election and that ends up leading to violence.”

Platt added: “As much as we think we’re evolving as a society, as a government, as a people, our narrative really hasn’t changed that much in matters of race and truth telling and revolution. We’re proud of having that the opportunity to make this story, to put it out there in the world and to let history be a teacher to all of us.”

The Oscar-winning Redmayne (“The Theory of Everything”) acknowledged he was “pretty ignorant” about the Chicago riots and the subsequent trial. “One of the things I find extraordinary about the way Aaron had sort of created this piece was that he wrote this extraordinary narrative and true story that was thrilling, something that was incredibly funny and deeply serious,” said Redmayne, who like Baron Cohen, is British. “It taught you, but it’s done with a deftness and lightness of touch. I think that is what great art should do.”

Baron Cohen, who just won two Golden Globes for his comedy “Borat: Subsequent Moviefilm” and is also nominated for a WGA award, describes Sorkin’s words as “beautiful and perfect,” adding that Sorkin would sometimes do little revisions on the script. “Sometimes there’d be very tiny, little changes…. For me as somebody who’s well known for improvising at times it felt slightly ironic, I was cast in it.”

Sorkin did allow Baron Cohen to pitch various lines during the course of production. But Sorkin would politely decline. “He really is the Shakespeare of modern cinema,” Baron Cohen offered. “And the wonderful surprise is Aaron is actually a fantastic director. He’ll never admit it because he’s incredibly modest and gives all the department heads amazing power and independence, but he has a very specific vision and that for myself, and if I can speak for Eddie as well, relaxes you.”

Sorkin, who had only directed one feature 2017’s “Molly’s Game” before “Chicago 7,” wasn’t set to helm this film. Steven Spielberg was going to direct it initially about 14 years ago. Then over the years, it went through the hands of other directors. “When the world really seemed to take a sharp turn with the first campaign of Donald Trump and then the presidency of Donald Trump, Steven felt the time to make it was now. He had seen ‘Molly’s Game. He was sufficiently pleased with that he thought I should director ‘Chicago 7.’” He readily admitted he was nervous about directing the film. “If you are not nervous, I think you’re not concentrating enough on what you have to do.”