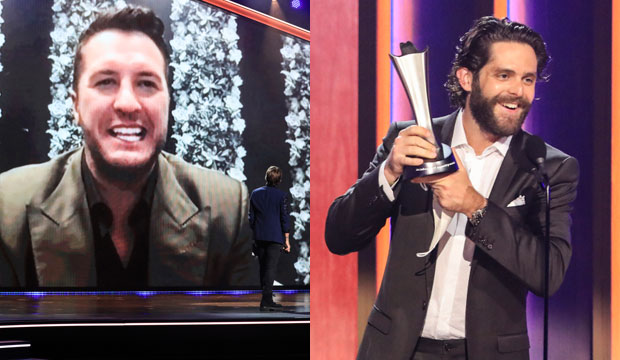 The 2021 Academy of Country Music Awards were this past Sunday, April 18, and they were filled with unexpected wins, big snubs, and inspired choices. Let’s review the biggest shockers of the night and why they were so surprising.

Bryan took the biggest award of the night. The country superstar beat Luke Combs, who led our predictions with 10/3 odds; Thomas Rhett, who won last year and followed with 19/5 odds; and then Eric Church (4/1 odds) and Chris Stapleton (9/2 odds). Only 24 of our users correctly predicted Bryan’s upset win. This year was the third time Bryan won EOTY, winning previously in 2013 and 2015.

“I Hope You’re Happy Now” wins Single of the Year

This song winning Music Event of the Year wasn’t that surprising. It was a big hit, and performers Lee Brice and Carly Pearce are liked by their peers. But it was a rare instance of the CMAs and ACMs agreeing on this award: the last time a song won both was “We Were Us” by Keith Urban and Miranda Lambert in 2014.

The more shocking win was definitely Single of the Year. It was last in our odds for the category. It’s also weird considering Maren Morris‘s “The Bones” won Song of the Year when it would have made more sense winning Single instead since Single tends to go with the biggest hit and “I Hope You’re Happy Now” is arguably the third or fourth most successful in the lineup. One strong possibility: the win might’ve been in large part to honor the song’s producer, Busbee, who tragically passed away of brain cancer in September 2019 when he was only 43.

Rhett did not go home empty-handed. He achieved an upset and won Male Artist, beating front-runners Chris Stapleton (17/5 odds) and Luke Combs (37/10 odds). This marks Rhett’s third win in the category; he previously won back in 2017, when his song “Die A Happy Man” also took home the award for Song of the Year, and in 2019, when he also claimed Video of the Year for “Remember You Young.”

This was not a surprising win so much as it might’ve been a case of our users betting on the name recognition of his rival nominees. “Worldwide Beautiful” is a moving video, addressing equality in the wake of the Black Lives Matter protests last year. This was surely an inspired pick, beating Miranda Lambert’s hit song “Bluebird,” as well as ACM favorites Carrie Underwood (“Hallelujah”) and Maren Morris (“Better Than We Found It”).