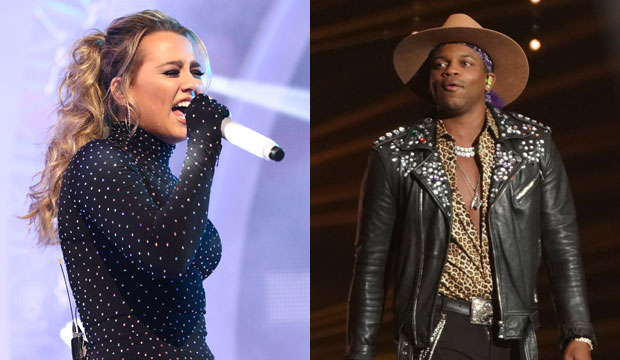 The 2021 Academy of Country Music Awards aren’t until April 18, but on April 8 they announced a couple of the ACM Awards winners early: Jimmie Allen as New Male Artist of the Year and Gabby Barrett as New Female Artist of the Year. In addition to their victories, they’re also joining the list of performers scheduled to appear during the broadcast. Watch ACMs host Keith Urban surprise the winners with the news here and here.

This was the second nomination in this category for Allen, who defeated Cody Johnson, Hardy, Parker McCollum, and Travis Denning. His victory makes him the first Black winner ever in his category at a time when the country music industry has been confronted with how overwhelmingly white the genre has been over the course of its history. The ACM ceremony itself will be co-hosted by Mickey Guyton, who is the first Black woman ever to emcee the event.

Guyton herself was nominated for New Female Artist of the Year, as were Caylee Hammack, Ingrid Andress, and Tenille Arts, but that award went to Barrett instead. This was Barrett’s second nomination in a row for New Female Artist, and this year she’s also nominated for Single of the Year for her breakthrough hit “I Hope,” which became a crossover pop smash that reached number-three on the Billboard Hot 100 singles chart and number-one on the Hot Country Songs chart.