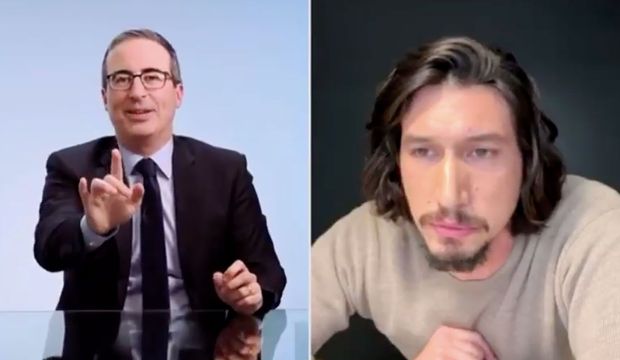 Despite a surfeit of Emmy Award achievements, however — including numerous writing and technical craft honors — the John Oliver show has never received a nomination for its lengthy list of A-list guest stars, many of whom participated in viral segments over the years to help Oliver buttress his latest point. But there was a chance that could have changed this year thanks to Adam Driver. The four-time Emmy nominee, who was honored in the Guest Actor in a Comedy Series category last year for his appearance as host of “Saturday Night Live,” was on the ballot as a guest actor again for playing himself on the “Last Week Tonight” season finale.

Throughout 2020, Oliver peppered his segments with random, often sexually violent nonsequiturs about the “Star Wars” star, including pleas for Driver to “choke slam me to hell, you nasty shed.”

“A lot of you might well be wondering where I’m going with this bit,” Oliver said in May of last year after yet another Driver joke. “If you’re anything like my staff, you’re asking questions like, ‘Is this sexual or is it violent?’ And then you’re unsatisfied when the answer comes back, ‘Yes.’ If you’re like my wife, you might be asking, ‘Should I be worried about this?’ with your concern only growing when the answer is, ‘Only if you want to be.’”

During that same episode, Oliver wondered if Driver himself would take issue with the unexpected and bizarre attention. “Is he bothered by this continued sexualization? He seems like a fairly private guy who’s generally uncomfortable with attention, making what I’m doing possibly some form of harassment,” Oliver said. “He might actually have pretty good grounds to have me reprimanded legally. To which I say, do it. Slap a restraining order on me your forlorn block. Beg me to stop, you menacing obstacle.”

The running gag continued unabated from there until the show’s November season finale. During that episode, after yet another Driver mention (“Crush my larynx, you unwieldy boulder”), the two-time Oscar nominee interrupted “Last Week Tonight” via FaceTime to excoriate Oliver.

“Listen to me: What the f– are you doing? This bit? This bit, this thing you’ve been doing that’s either sexual or violent,” Driver said. “This strange, strange bit that for some reason you’ve pulled me into. What is it? When you first started doing it, it was easy for me to shrug it off. But then it kept going on, and on, and on, and on.”

By the end of the appearance, Oliver got Driver to belittle him personally, much to the host’s masochistic delight.

Speaking later that same month to Seth Meyers, Oliver explained how the joke came together. “A few months into the bit…we reached out to him and said, ‘I don’t know if you know what we’ve been doing. We’ve been making some comments about you, and would you hypothetically be interested in responding towards the end of the year?’” Oliver said.

According to the host, Driver had kept tabs on the gag. “‘He has heard about it, he thinks it’s very strange, and he’s in,’” Oliver said he heard back from Driver’s representatives in reply.

“We didn’t know what we were gonna do, but at least we knew at that point that we had an end in sight,” Oliver added. “And as it turned out, what the end in sight was, was him calling into the show and explaining the ways in which he was gonna demolish me.”

With such a focus on Driver throughout the 2020 season of “Last Week Tonight,” it should come as no surprise that when the HBO show won for writing, the staff dedicated the honor to the “Marriage Story” star: “We would like to dedicate this award to Adam Driver. He knows what he did — and we know what we would like him to do.”