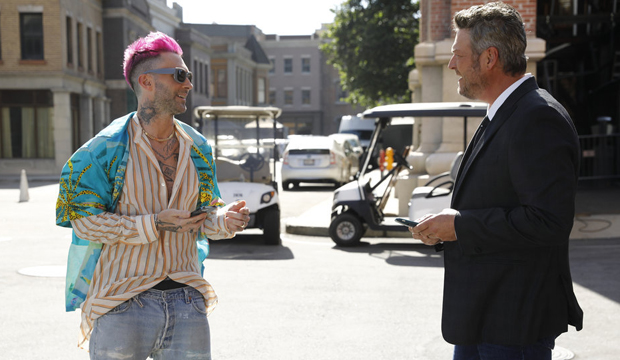 During Tuesday’s finale of “The Voice” Season 20, fans everywhere celebrated the return of one of the reality TV show’s original coaches, Adam Levine. The former occupant of the big red chair reunited with old “frenemy” Blake Shelton at the start of the episode. As you’ll recall, Levine was a coach on the reality TV program between Season 1 and Season 16, leaving unexpectedly after that and being replaced last-minute by Shelton’s girlfriend Gwen Stefani.

“I was just texting to say I can’t wait to see you,” a giddy Blake told a pink-haired Adam in the pre-taped video package. After they took a selfie together, Adam got annoyed by how excited Blake was to see him. When Adam walked toward the entrance of the building, Blake told him, “I’m texting you that you’re wearing two shirts right now. Did you get the text? Did you get it? You know you love it … I’m gonna text him that!”

Levine later appeared at the end of the two-hour finale for a special performance of “Beautiful Mistakes” with his band Maroon 5, featuring Megan Thee Stallion in the background (watch below).

Levine’s departure in 2019 caught everyone off-guard as he was expected to return to the judging panel the following season. Many viewers suspected his decision to leave was influenced by the Season 15 controversy in which he infamously instructed people to vote for one of his artists (Reagan Strange) instead of the other (DeAndre Nico). However, as Levine said at the time, “For me, it was time to move on … What an amazing ride.”

Each week, Levine and Shelton entertained fans with their love-hate relationship, eventually growing to become unlikely friends. On one of the pop star’s final episodes, their “feud” seemed to be squashed when the country coach kept a Team Adam artist in the competition by stealing her. “Blake, can I just say one thing? Dude, you’re awesome,” Levine told his rival coach. “I don’t even know what’s going on. I don’t even know who I am right now.”

SEE ‘The Voice’: Past Winners (All Seasons)

'The Voice': Past Winners (All Seasons)