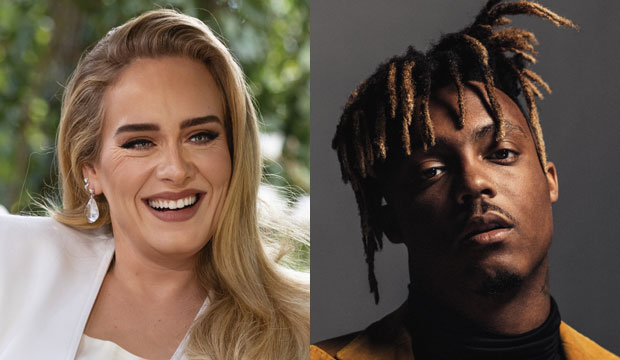 Adele can’t stop, won’t stop on the Billboard 200 albums chart. Her “30” spends a fourth week at number-one this week, and she didn’t lose much ground from last week, dipping just 6% to 183,000 equivalent album units based on her combined album sales, individual track sales, and online streams. More on her chart performance here at Billboard.com.

“30” is the first album to spend four consecutive weeks at number-one since Morgan Wallen‘s “Dangerous,” which actually spent its first 10 weeks in a row in the top spot at the start of the year despite the controversy that was unfolding at the time of Wallen being recorded using a racial slur — scarily, perhaps it was partly because of that controversy that some listeners flocked to him. The 183,000 units earned by “30” makes it the strongest fourth week for any album since Drake‘s “Scorpion” in 2018.

It was more than enough to hold off the week’s top debut, Juice WRLD‘s “Fighting Demons,” which achieved 119,000 units, the vast majority of which were from streaming: despite the lower total units, “Demons” had more than triple the streams of “30.” This is the second posthumous album from the rapper, who died in December 2019 when he was only 21-years-old. His last posthumous album, 2020’s “Legends Never Die,” has been a mainstay on the chart for a year and a half; it was the ninth biggest album of 2020 according to Billboard’s year-end chart, and in 2021 it was the number-11 album.

“Fighting Demons” pushed Taylor Swift‘s “Red (Taylor’s Version)” one spot down to number-three. Michael Buble‘s seasonal favorite “Christmas” held steady at number-four, while Mariah Carey‘s “Merry Christmas” ticked up one spot to number-seven and the “Charlie Brown Christmas” soundtrack by the Vince Guaraldi Trio rose to a new all-time best at number-eight. So Christmas is still very much on music listeners’ minds as the holiday approaches, tough it seems that most are still indulging in a sad girl winter.