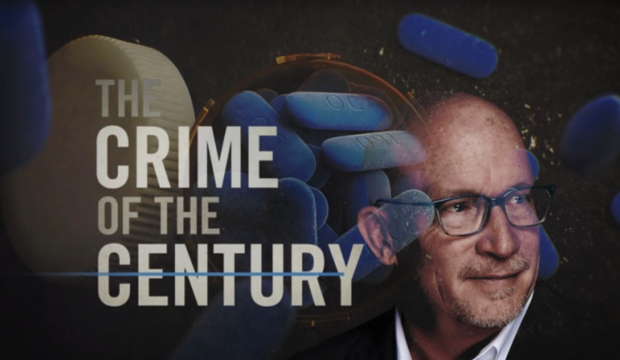 The statistics are staggering. Over half-a-million Americans have died of opioid overdoses triggered by controlled-release Oxycontin. So, the big question is how did this happen?

“The Crime of the Century,” HBO’s new two-part, four hour-documentary airing May 10-11 from the Oscar and Emmy-winning Alex Gibney (“Taxi to the Dark Side,” “Going Clear: Scientology & the Prison of Belief,” “Mea Maxima Culpa: Silence in the House of God”) and produced in association with the Washington Post, is a disturbing deep dive into how Big Pharma, political operatives and government regulations helped cause this massive health crisis. The first part looks at the origins of the crisis while part two explores the marketing of the deadly synthetic opioid fentanyl. Recently, the Washington Post hosted a zoom conversation between Gibney and Post reporters Sari Horwitz and Scott Higham who have investigated the drug crisis for several years.

“The Crime of the Century” was three years in the making. Gibney was drawn to the subject matter after a conversation with the investigative unit at the Post. “I believe even at the first lunch, Scott Higham was there. They brought it to my attention that we had been kind of misunderstanding that the opioid crisis is a kind of natural catastrophe like a hurricane or a flood. It really involved a series of crimes and a series of chapters related to the kind of drugs. So, with that in mind, it seemed like a huge story. It was just kind of hiding in plain sight. I was determined to dig in to tell a story about the forest rather than the trees.”

Higham noted that the Post investigation began with a simple question from a curious health reporter, Lenny Bernstein. “The question was why are there so many pills on the streets of America and why are so many people overdosing? Lenny began reporting like any good reporter  would do by calling sources, developing sources, looking at court documents, looking at settlement documents between drug companies and the DEA and the Justice Department tying to ignore what was going on there.”

Horwitz joined the team four years ago. “I was covering the Justice Department and officials there kept talking about this street drug fentanyl, it was killing thousands of people,” said Horwitz. “It was a synthetic opioid made in China, sold over the internet and people were buying it. It was being shipped into this county through the mail. They told me it was the deadliest drug on the street at that time.”

She and Higham shared notes. “We quickly realized these two epidemics, fentanyl and prescription pills, were connected. In fact, the fentanyl epidemic was the third wave of what started with prescription pills. They were legal. They were highly addictive. Government cracked down on them. People who were addicted to them turned to heroin. Then the Chinese drug dealers exploited the market by selling and exporting fentanyl, which was cheaper and more potent.’

“Crime of the Century” explores the origins of the opioid crisis and how it started with the wealthy, powerful Sackler family and their company, Purdue Pharma. “That’s kind of the match that lights the forest fire that engulfs the country,” said Gibney.  The remarkable thing is the Purdue Pharma company convinced people after hundreds of years of experience of understanding just how addictive opium and opiates are going back to the opium war with China that ‘Oh no, opiates really aren’t addictive. You can take as much as you want.’”

PREDICT the Emmy nominees until July 13.

Even as early as 2006, prosecutors tried to stop Purdue from flooding the market.  But even savvy prosecutors in West Virginia couldn’t hold them accountable. “They ran afoul of politically motivated bosses in Washington and had to cut a deal which ends up sealing of a lot of the evidence leaving hundreds of thousands more to die,” noted Gibney. Purdue and other Big Pharma companies also bandied about the term pseudo-addiction, “that really what people were responding to was that they weren’t getting enough release from the pain. So, to cure pseudo addition, the response then was to up the dose. What a magical formula for a company that happens to be pushing opioids. If there’s a problem with addiction, no worries, we’re just going to increase the dosage. It was madness, but it was briefly accepted as gospel.”

Gibney acknowledged opioids can be a valuable drug for a few days if you have a serious operation. “I remember after a knee operation getting morphine and it was great. It’s hugely effective in terms of stopping pain and for long release oxycodone, which is Oxycontin, the contin is the long release mechanism that Purdue formulated for cancer patients at the end of life can be very valuable.” But Purdue wanted to expand their market because it wasn’t going to be a very valuable drug for the company with such a narrow market. “We want a much bigger market,” said Gibney of Purdue. “And the bigger market would be anybody in any kind of chronic pain at all. So, if you’re an 18-year-old and you have a knee injury, how about Oxycontin.”

The problem, noted Gibney, is that once people started using Oxycontin, they began to get addicted.  “Because there was so much potent drug in this time-release formula. A lot of people, who were seeking a vigorous high, learned how to break down the time release formula and get a really a massive amount of opioid in their system by snorting it or injecting it.” Purdue knew of these problems, but “swept them under the rug in the service of a marketing plan that was designed to achieve greater profits,” said Gibney. “The drug ended up outselling Viagra. The problem was there was this terrible collateral damage and collateral damage was death.”