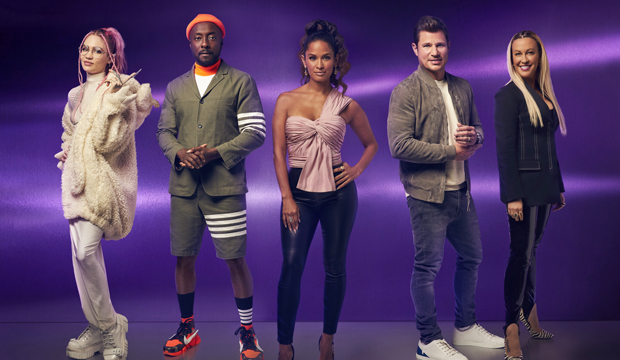 The second of the two “Alter Ego” semi-finals aired on December 1 with four of the remaining contestants singing their hearts out as digital avatars. Judges will.i.am, Alanis Morissette, Grimes and Nick Lachey decide which two move forward in the competition and which two are forced to reveal their true identities.

Rocsi Diaz hosts the groundbreaking singing competition. The first semi-final concluded with Misty Rose reigning supreme on the diamond and automatically earning her spot in the finale. After the audience vote, Queen Dynamite was eliminated with the fewest votes. Next, the judges voted unanimously for Night Journey to join Mistry Rose in the finale, eliminating opera singer Wolfgang Champagne.

Below, read our minute-by-minute “Alter Ego” recap of Season 1, Episode 10 to find out what happened on December 1 at 9:00 p.m. ET/PT. Then be sure to sound off in the comments section about your favorite artists on Fox’s new reality TV show, whether or not you agree with the judges’ decisions and who you think will ultimately become the first digital superstar to emerge from “Alter Ego.”

Keep refreshing/reloading this “Alter Ego” live blog for the most recent updates.

9:00 p.m. — Tonight the “Alter Ego” semi-finals come to a close. The remaining four singers and their customized alter egos have one last opportunity to impress the judges and the studio audience for the two remaining spots in the finale. Who will get one step closer to the $100,000 grand prize and the chance to be mentored by the panel of superstar judges?

9:08 p.m. — The first singer of the night is Seven. Tonight they are trying to bring their A game and Seven has been training harder than ever. Singing Michael Bublé‘s version of “Feeling Good,” Seven is utilizing that beautiful lower register to its full capacity. I think the fact that this avatar is actually a man voiced by a woman works against them. A woman with this unique tone is what makes the singer so fascinating to watch. Nick says Seven commands attention. The judges agree, Seven deserves to be on top of the diamond…for now.

9:17 p.m. — Next up is Safara. She has an emotional exchange with the judges regarding her insecurities before taking the stage. Safara is slowly growing to love herself and gain confidence. Singing “Stronger (What Doesn’t Kill You)” by Kelly Clarkson, Safara brings her message to the masses. She starts off a little shaky from the nerves, but once Safara hits the chorus she really soars. I like the energy she brings to this and the judges seem to be having a good time as well, responding with a standing ovation. will.i.am thought it was “fire” and compliments the power in her voice. Safara doesn’t get the three votes she needs to replace Seven on the diamond, but it’s not over for her yet! We will find out if Safara advances to the finale later on in tonight’s episode.

9:28 p.m. — The third performer tonight is Dipper Scott. He’s excited about the prospect of being a digital superstar because of his limitations with Crohn’s disease. He could potentially have a show in Japan while actually performing from California. He says he would also like to pay off a lot of medical bills if he wins the grand prize. Singing “Happier by Bastille & Marshmello, Dipper almost instantly captivates the panel. He’s someone who sounds like he could be on the radio right now and I think they can appreciate that. He’s also just a hell of a singer. The judges struggle with their decision, but ultimately vote for Dipper to replace Seven on the diamond.

9:40 p.m. — Last up tonight is Orlando Deville. He shouts out the designers who have helped him elevate his look and he’s sporting a suave orange suit while belting out “Living in New York City” by Robin Thicke. This is a highly entertaining performance and he’s got more dance moves than anyone. It really elevates his soulful vocals and makes him fun to watch. Nick calls it “charming” and Alanis says Orlando’s swagger is “full blown.” Despite Orlando’s strong performance, the judges choose to keep Dipper on the diamond. That means Dipper Scott is officially going to the finale!

9:50 p.m. — Three alter egos remain in the running for one spot in the finale. The studio audience will now vote. The singer with the fewest votes will automatically be eliminated. That alter ego is Safara. Before she goes, Safara sings “Say Something” by A Great Big World & Christina Aguilera. Partway through she is joined by her true identity, Mariah Rosario, a 26-year old from Phoenix, Arizona. It’s an emotional moment that brings another tear to will.i.am’s eye. Mariah learned to be confident in herself and to love herself no matter what anyone says about her. Alanis is excited for Mariah and begins to cry when wishing the best for the aspiring singer.

9:59 p.m. — Now it’s time for the judges to choose between Seven and Orlando Deville. Only one can join Dipper Scott in the finale from this semi-final. The judges vote unanimously to send Seven to the finale. Before Orlando says goodbye, he sings “Hold On, I’m Comin'” by Sam & Dave. The energetic alter ego is quickly joined by his enthusiastic true identity, Chase Padgett, a 38-year old from Vancouver, Washington. Chase says he’s always been told that he has a voice made for the stage but a face made for IT. He enjoyed his time as Orlando Deville, but Chase will take it from here! That’s a wrap for this semi-final. Next week Dipper Scott, Seven, Misty Rose or Night Journey will be crowned the winner.