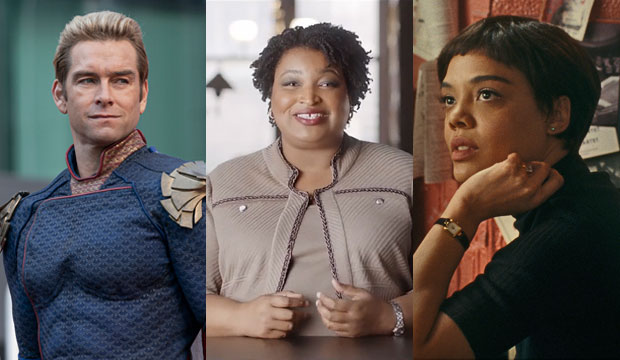 Amazon Prime just won a couple of Oscars for their film “Sound of Metal,” and now the streaming service is jumping right into Emmy season with “Beyond the Screen” virtual events and a “Prime Video Presents” podcast to promote their slate of programs from May 1 through June 10. Their events can be found on the Emmys FYC calendar.

Among the programs being promoted by Amazon this season include the sci-fi dramas “The Boys” and “The Expanse”; the Barry Jenkins limited series “The Underground Railroad”; the telefilms “Uncle Frank,” “Yearly Departed,” and “Sylvie’s Love”; the documentary “All In: The Fight for Democracy“; the anthologies “Solos” and “Them”; and the theatrical special “What the Constitution Means to Me.”

“Beyond the Screen” kicked off over the weekend with one of the streamer’s biggest contenders, Steve McQueen‘s Golden Globe and Critics Choice-winning anthology “Small Axe.” Amazon hosted panels with cast and crew followed by a “Lovers Rock” Launch Party with DJ Silent Addy. The eight-episode “Prime Video Presents” podcast will be available anywhere you listen to podcasts and kicks off on May 6, also with “Small Axe’s” McQueen (listen to McQueen at the bottom of this post).

Amazon’s Director of Awards, Debra Birnbaum, said in a statement, “These innovative, immersive activations allow us to bring television academy members deeper into the worlds of their favorite Amazon Prime Video content. We’re excited to share this compelling lineup of exclusive conversations, behind-the-scenes features and never before seen moments from our immensely talented casts.”

The schedule is as follows:

SEEPeter Macdissi (‘Uncle Frank’) on how Wally reconciled faith and sexuality: ‘He’s the character that knew himself the most’ [EXCLUSIVE VIDEO INTERVIEW]

THURSDAY, MAY 13
“Prime Video Presents” Episode 4 hosted by Tim Kash
“The Boys” with various guests
In tandem with “The Boys”: The Official Podcast “Stunts & Costumes,” episode 6

SUNDAY, MAY 16
“What The Constitution Means To Me” at 2:00 PM
Panel moderated by Kathryn Hahn (Actress, “WandaVision”)
Heidi Schreck (Writer, Performer, and Executive Producer)

THURSDAY, MAY 20
“Prime Video Presents” Episode 5 hosted by Tim Kash
“What The Constitution Means to Me” with Heidi Schreck

“The Boys”: The Official Podcast “Best of The Boys Season 2,” episode 7

SUNDAY, MAY 23
“Beyond the Screen” closing night with musical entertainment