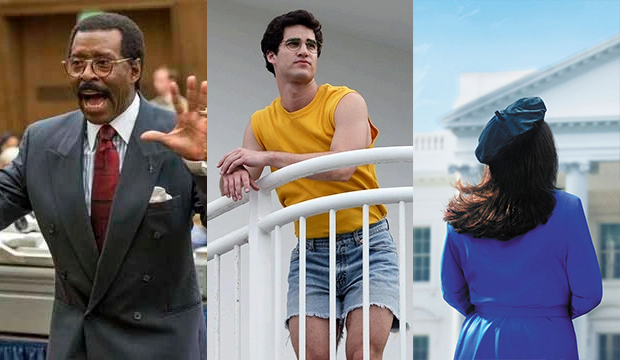 Ryan Murphy‘s FX anthology series “American Crime Story” is an Emmy magnet, winning Best Limited Series for each of its first and second seasons, “The People v. O.J. Simpson” (2016) and “The Assassination of Gianni Versace” (2018). Now the buzzy third installment, “Impeachment,” is hoping to match the success of its predecessors and walk off with the top trophy at the 2022 Emmy Awards.

The highly anticipated project was first announced in 2017, only to be scrapped. It was resuscitated soon after when the real-life Lewinksy signed on to be a producer. The show finally premiered September 7 on FX after being delayed once again due to the Covid-19 pandemic. Sarah Burgess serves as the head writer with Murphy, Michael Uppendahl, Laure de Clermont-Tonnerre and Rachel Morrison taking turns directing.

TV critics can’t get enough of “Impeachment,” with the Los Angeles Times calling it a “must-see limited series … propelled by the brand of brisk, addictive storytelling, stellar casting and high-end soap appeal that have defined the ‘American Crime Story’ franchise.” And CNN raves, “Paulson’s portrayal of Linda Tripp steals the show, but there’s no shortage of remarkable work in a production that deserves an Emmy for its prosthetic makeup alone.”

Will “Impeachment” follow suit? The 2022 Emmys are still a year away, but it’s safe to say the latest cycle will be competitive in the above-the-line races like series, writing, directing and acting. Also watch out for it in all of those below-the-line categories, particularly makeup, hairstyling and costumes, where it’s already being heralded by fans and critics.