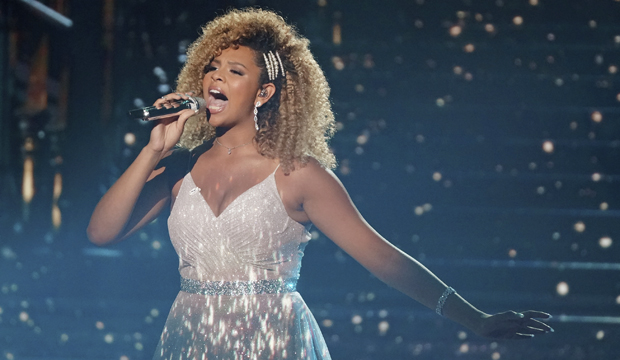 “American Idol” fans are still in shock over Alyssa Wray being eliminated during Sunday’s Top 10 episode. In our recent poll that asked viewers to name who was most robbed of a spot in the Top 7, this 18-year-old from Perryville, Kentucky topped the list with 52%. The other two eliminees — Deshawn Goncalves and Cassandra Coleman — were essentially tied for second place. Do you agree or disagree with your fellow “Idol” watchers? Sound off down in the comments section.

Here’s a closer look at the fans’ poll results for who was most robbed on Disney night:

Alyssa originally chose “I Am Changing” by “Idol’s” Jennifer Hudson as her audition song. After Hollywood Week, she took on “I’m Here” (showstopper round), “Something in the Water” (Top 24 solo), “I’m Your Baby Tonight” (Top 24 duet with Katharine McPhee), “Killing Me Softly with His Song” (Top 16 week),”The Greatest Love of All” (Top 12 live reveal), “This Is Me” (Oscar week) and “A Dream Is a Wish Your Heart Makes” (Disney week).

Following her performance of the “Cinderella” classic (watch below), Lionel Richie complimented Alyssa’s sparkly dress and admitted he was proud she held the big moments for the end. “It was an amazing performance, I loved it,” he raved. Fellow judge Katy Perry, aka Tinker Bell, agreed with Lionel on her “control” and told her she was a “permanent princess.” And Luke Bryan added, “Everything that you’re presenting, from your presentation of who you are to the way you deliver the song, is truly a work of art to watch.”

Following the eliminations of Alyssa, Deshawn and Cassandra, only seven contestants are still in the running to join the “American Idol” winners list. Who do you think will earn the coveted confetti shower in the Season 19 finale? Let’s take a peek at their most recent odds to win: