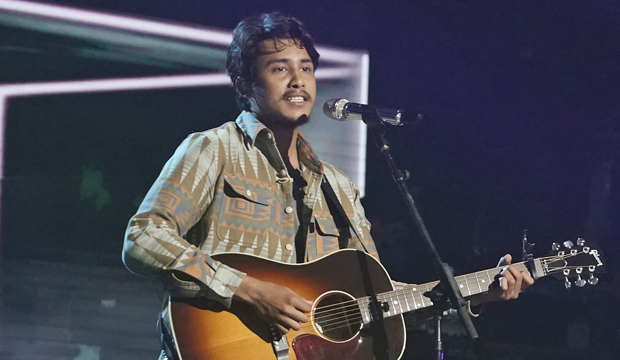 Arthur Gunn‘s two-year journey on “American Idol” came to an end during Sunday’s Top 7 episode, and fans are still picking their jaws up off the floor. In our recent poll that asked viewers to name who was most robbed of a spot in the Top 5, this 23-year-old artist from Wichita, Kansas came in with 24% support. This week’s other eliminee, Hunter Metts, topped the list with an overwhelming 62%. The remaining 14% of poll respondents couldn’t decide and voted for the “both of them” option. Do you agree or disagree with your fellow “Idol” watchers? Sound off down in the comments section.

The raspy-voiced singer made it all the way to the runner-up position during last year’s Covid-interrupted 18th season, with Just Sam ultimately beating him for the title. Arthur joined the current competition when the live shows began after winning America’s vote as the first-ever comeback contestant, triumphing over such fan faves as Louis Knight and Makayla Phillips.

Arthur’s time on this 19th season was relatively short, as he only delivered four performances: “Iris” (Comeback song), “Remember Me” (Disney week), “In My Place” (Coldplay song) and “Simple Man” (Mother’s Day song). He synced up with the rest of the Top 7 after they enjoyed a fun week at Walt Disney World Resort in Florida.

Following his performance of “Simple Man,” which he dedicated to “all the sweet mothers out there” (watch below), Lionel Richie called Arthur a “stylist” because his voice is “signature to who you are.” However, Katy Perry and Luke Bryan were less than blown away. Katy had initial hesitations about him performing a Lynyrd Skynyrd song for Mother’s Day, but conceded, “That song really was great for your voice and Arthur Gunn is Arthur Gunn.” And Luke noted, “Be sure to be up there fighting every chance you can. And be sure to really dig in even more.”

With only five contestants still in the running to join the “American Idol” winners list, let’s take a look at their updated odds to win: