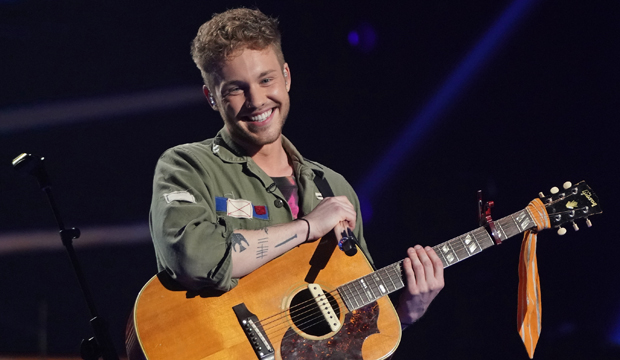 “American Idol” fans are still pulling their hair out over Hunter Metts being eliminated during Sunday’s Top 7 episode. In our recent poll that asked viewers to name who was most robbed of a spot in the Top 5, this 22-year-old singer-songwriter from Franklin, Tennessee topped the list with 62%. The other eliminee, Arthur Gunn, came in at 24%. The remaining 14% of poll respondents couldn’t decide and voted for the “both of them” option. Do you agree or disagree with your fellow “Idol” watchers? Sound off down in the comments section.

At his original audition, Hunter explained that he was finally allowed to try out for “American Idol” this year because of his sister, who resigned her job at Disney in order to avoid a conflict of interest. He chose Kaleo‘s “All the Pretty Girls” as his audition song and blew away the trio of judges: Katy Perry, Lionel Richie and Luke Bryan.

Following Hunter’s rendition of his original song “The River” (watch below), Luke declared him to be a “10 out of 10.” He added that it was a “musical experience done by a pro.” Lionel agreed, noting, “You drifted over to pro status, my friend. Amateurs are out right now. The Top 10 of this group is just amazing and you held in there so strongly.” Katy applauded him for taking a big risk with an original song, saying, “It is one thing to sing, but to be a songwriter, to be in the driver’s seat in your life and your message is the whole thing.”

With only five contestants still in the running to join the “American Idol” winners list, let’s take a look at their updated odds to win: