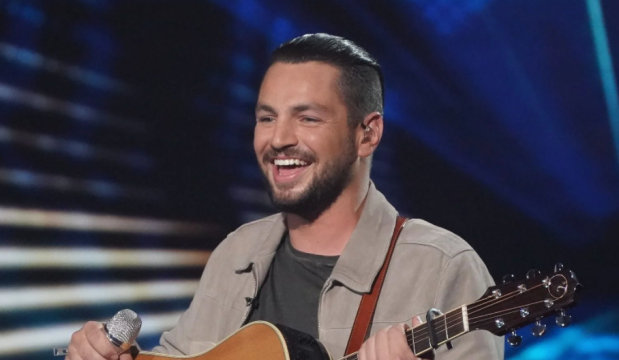 “I got pushed a lot by my parents and family,” said “American Idol” semifinalist Chayce Beckham at his audition in Ojai. “They’ve been telling me to do this. This past year has been pretty interesting for me. I’ve gone through a lot of ups and downs. It’s been quite the rollercoaster.” The 24-year old forklift operator from Apple Valley, California recovered from a drinking problem before earning his spot on the ABC reality TV competition by singing “What Brings Life Also Kills” for judges Katy Perry, Lionel Richie and Luke Bryan. On Sunday, May 16 Beckham will compete against Casey Bishop, Grace Kinstler and Willie Spence for a spot in the Season 19 finale.

Each artist will sing three songs on this upcoming episode including a brand new single produced just for them. Beckham’s original track is “23” produced by Grammy nominee Ross Copperman and Redah. The singer-songwriter will also perform a number one country hit, “Colder Weather,” and duet with Bishop on “Break My Heart Again” from guest mentor FINNEAS.

From the judging panel, Bryan declared Beckham was “what this show is all about.” The forklift driver is “why I call people back home and say, ‘wait til’ you see this dude.'” Richie has been equally impressed, praising Beckham’s songwriting skills, while Perry said his voice “sounds like the heart of America” and correctly predicted Beckham would make the Top 5 at his blind audition.