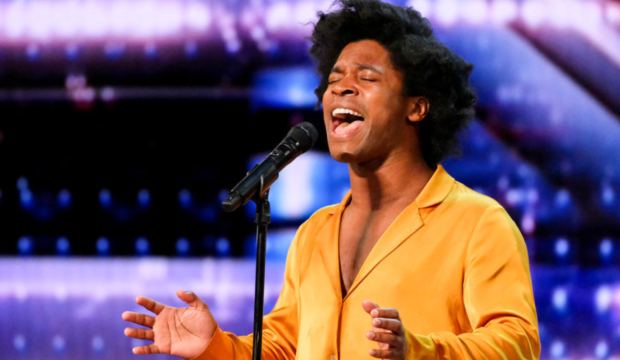 On a night when the “America’s Got Talent” judges were dishing out standing ovations like candy to kids on Halloween, the moment when Sofia Vergara didn’t stand with the other three following Jimmie Herrod‘s jaw-dropping rendition of “Tomorrow” smelled rotten. Thankfully, she was simply pulling a fast one on us, preparing a move to send Jimmie straight through to the live shows as her Golden Buzzer choice of the season.

Sofia’s sly joke hit perfectly considering Simon Cowell had already began Jimmie’s audition from a precarious position. When Jimmie announced that he’d be singing “Tomorrow” from the musical “Annie,” Simon declared that it’s his “worst song in the world” and urged him to sing something else. Jimmie stuck to his guns and said that he “doesn’t have another,” so with a final “good luck” he went into the Broadway ballad.

After just one line of the song, Simon’s eyes opened wide and it was immediately clear that the fret on his face was turning to surprise and then joy. Throughout the performance we caught glimpses of Simon, Howie Mandel and Terry Crews being blown away by Jimmie’s voice. At times, like when Jimmie was hitting his biggest notes, Heidi Klum‘s jaw would drop a little, but Sofia remained reserved to the point of remaining in her seat as they other three rose to their feet.

SEE Where are the first 15 ‘America’s Got Talent’ winners now: Find out what happened to your favorites

Simon was able to change his mind, saying that “it’s not [his] worst song anymore,” before passing the mic over to Sofia who hesitantly stated that she “didn’t like it that much.” Amidst boos from the audience and extreme confusion from Terry, Sofia clarified, “But I loved it!” and hit the Golden Buzzer so that gold confetti rained down on Jimmie. On stage she told Jimmie that she “had to” and that he deserves it. Back at the dais, Simon told Sofia that he legitimately thought that she didn’t like the performance, fooling him and the others who continued to be amazed by how “incredible” Jimmie’s audition was.

In the audition phase of “AGT,” an act needs at least three of the four judges to give them a “yes” vote to advance to the next round. If two or more judges buzz the act, they are immediately eliminated. Each judge and Crews has one chance to hit the “golden buzzer” and send an act straight through to the live performances. Jimmie joins the three acts to already receive their own Golden Buzzer so far this season: Terry’s pick World Taekwondo, Howie’s pick Northwell Nurse Choir and Simon’s pick Nightbirde.