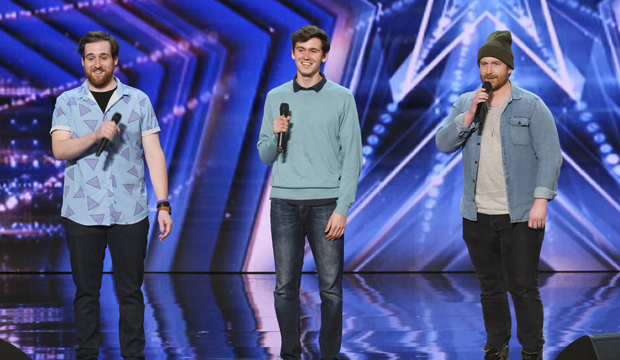 This week on “America’s Got Talent,” fan-fave vocal trio T.3 was shockingly eliminated from the competition just short of the semifinals. Blame Simon Cowell. The cranky British judge received boos when he told the guys they “blew it” on live television following their performance of “good 4 u” by Olivia Rodrigo. (The other ousted acts this week were Johnny Showcase, Dokteuk Crew, Shuffolution and Positive Impact Movement.) In our recent poll, we asked “AGT” viewers to tell us which act was most robbed of a spot in the semis and a whopping 45% voted for T.3. Here are the complete poll results:

Simon called T.3’s remix of the Olivia Rodrigo hit song a “great idea” but with a “horrible track.” He barked at them, “You could have had a fantastic moment with just the vocals. You’re really, really good singers. I think if we could rewind this we would have done it all over again … and I think you blew it.”

At the other end of the spectrum, Howie Mandel gave the guys a standing ovation, telling them, “Your harmonies are seamless.” Heidi Klum and Sofia Vergara were more mixed in their critiques, with Heidi saying she “prefers” when they sing acapalla and Sofia remarking on how she “liked” their “Frozen 2” audition much better.

T.3’s negative critiques at the start of the Quarterfinals 2 episode seemed to have laid the groundwork for an underwhelming night. The two acts that followed them (Dokteuk Crew and Johnny Showcase) were also eliminated, as was the fifth in the order (Shuffolution) and the eighth act of the night (Positive Impact Movement).

The seven acts who advanced to the semifinals were singer Tory Vagasy, aerialist Aidan Bryant, chorale group Northwell Nurse Choir, mentalist Peter Antoniou, vocal group Korean Soul, comedian Josh Blue and opera girl Victory Brinker. For the Judges’ Save, the “AGT” panelists had a decision to keep either T.3 or Korean Soul, but their votes tied so it went to America’s choice of Korean Soul.