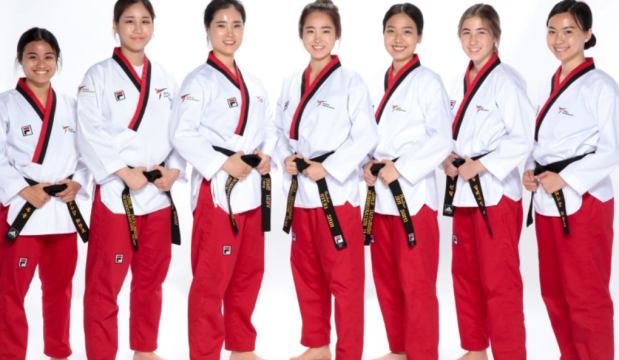 Due to the postponement of the 2022 Summer Olympics, World Taekwondo was not able to showcase in Tokyo as planned and so they tried out for “America’s Got Talent” instead. Hailing from South Korea and the United States, the large group of athletes specializes in the demonstration of the Korean martial art. Though they didn’t get to perform on the world’s biggest sports stage, World Taekwondo was able to earn themselves their own gold medal in the form of a Golden Buzzer given to them by Terry Crews who had “never, ever seen anything like this in [his] life.”

In their powerful audition on June 15, the group divided and conquered by showing a number of different “fight” sequences using the punching and kicking techniques of the martial art. In the beginning one member fought off a gang of other members by fighting his way through the wooden boards in their hands. Then they assembled for synchronized form displays and brought out the female members to show off their own control and strength. In the final stretch of acts, they raised wooden plans on beams and vaulted members into the air to destroy them, sending shatters of wood across the stage, at the judges, and in the face of Terry backstage.

Throughout the performance the panel of judged were reeling in shock and excitement. Howie Mandel immediately called it “one of [his] favorite things he’s ever seen” and Heidi Klum called out the “strength and power” on display that gave her goosebumps. Sofia Vergara knew that they put in the work to create a perfect and big show while Simon Cowell called it one of the “most extraordinary” things that’s been on the show.

But before they could drop their own votes on the act, Terry approached the dais with something of his own to say. Responding to their own banner that read “Peace is more precious than Triumph,” Terry told World Taekwondo that “this is not about fighting, it’s about courage, it’s about confidence and it’s about respect. And I respect what you guys did out here today like no one else.” He continued by saying that he was prepared to give them “something golden right now” before hitting the Golden Buzzer and anointing them as his choice to go straight through to the live shows.

“America’s Got Talent” kicked off season 16 on June 1 with a two-hour premiere. All four judges from last season returned: veterans Simon Cowell, Heidi Klum and Howie Mandel plus Sofia Vergara who joined “AGT” in 2020. Terry Crews once again brings his trademark enthusiasm to his hosting duties.

In the audition phase of “AGT,” an act needs at least three of the four judges to give them a “yes” vote to advance to the next round. If two or more judges buzz the act, they are immediately eliminated. Each judge and Crews has one chance to hit the “golden buzzer” and send an act straight through to the live performances. World Taekwondo joins the two acts to already receive their own Golden Buzzer so far this season: Howie’s pick Northwell Nurse Choir and Simon’s pick Nightbirde.

The format will be the same this year as last, with “America’s Got Talent” airing initially just on Tuesdays with the first six weeks devoted to the auditions that took place around the country. Then there will be four weeks of Judge Cuts beginning in July, followed by the series of live performance shows and results episodes.