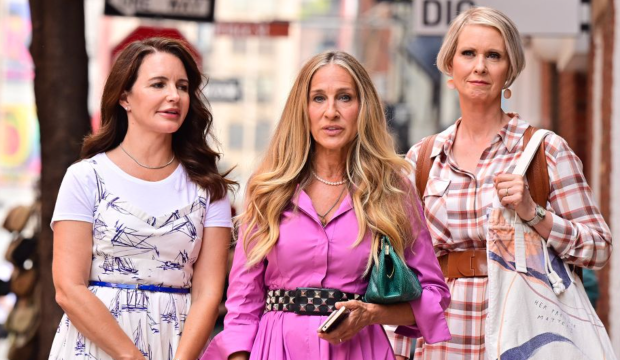 Soon after it was added to HBO’s then-modest programming slate in the spring of 1998, “Sex and the City” amassed scads of fans and critical praise, making it the network’s most successful comedy series up to that point. One of its main draws was its talented principal cast, which consisted of Kim Cattrall, Kristin Davis, Cynthia Nixon, and Sarah Jessica Parker.

Their Best TV Comedy Ensemble win at the 2002 Screen Actors Guild Awards made them the first (and, to date, only) all-female cast of a comedy or drama series to nab the top prize, and that distinction has only been challenged once (by the ladies of “Hot in Cleveland”) in the two decades since. Now, Davis, Nixon, and Parker are set to reprise their roles on the continuation series “And Just Like That,” and, if all goes well, their work could bring them even more SAG glory.

“And Just Like That,” which takes its title from a phrase often used by Parker’s Carrie Bradshaw in her writing and narration, will debut on HBO Max on December 9. Over the course of 10 episodes, viewers will be treated to a look at what Bradshaw and her friends Charlotte York (Davis) and Miranda Hobbes (Nixon) are up to 11 years after their last appearance in the feature film “Sex and the City 2.” Cattrall declined to participate in the revival, but several new actors have joined the main cast in her absence, including Sarita Choudhury, Nicole Ari Parker, Karen Pittman, Isaac Cole Powell, and Sara Ramirez.

Our users and experts are keeping a close watch on “And Just Like That” in making their predictions for the 2022 SAG nominations, and the ensemble’s odds are likely to increase once the show premieres. As it stands, they are in 13th place in a race that is currently being led by the actors from “Ted Lasso,” whose show just won seven Emmys, including Best Comedy Series. They were bested at the most recent SAG ceremony by the “Schitt’s Creek” ensemble, who are ineligible this time around since their show ended in April 2020. Also vying for a second consecutive bid are the actors from “The Great,” who are in fourth place.

Other previously nominated casts who have strong shots at returning in 2022 include those of “The Kominsky Method” (sixth place), “Curb Your Enthusiasm” (10th), and “Black-ish” (12th). Several ensembles of new series are also in the hunt, including those of “Hacks” (second), “Only Murders in the Building” (third), and “Girls5eva” (11th). The remaining slots are filled by casts of shows that have lasted at least three seasons but have not yet been recognized here: “What We Do in the Shadows” (fifth), “Cobra Kai” (seventh), “Insecure” (eighth), and “Sex Education” (ninth).

Before she triumphed alongside her castmates, Parker was awarded the 2001 Best TV Comedy Actress trophy on her second of four individual outings. Cattrall also contended for the same award in 2002 and 2003. In 2004, the quartet won the collective prize again, making them the second comedic cast to prevail twice, after the group from “Seinfeld.” The next year, they and the “Will & Grace” actors simultaneously became the third and fourth casts to earn five consecutive bids in this category, after those from “Frasier” and “Friends.”

In addition to lengthening the SAG resume of its returning cast members, “And Just Like That” could become the first revival series to win either of the ensemble prizes. As nominees, the actors would be included in the company of those from just three other shows that derived from previously nominated ones: “The Practice” spin-off “Boston Legal,” the second iteration of “Arrested Development,” and the “Breaking Bad” prequel “Better Call Saul.”